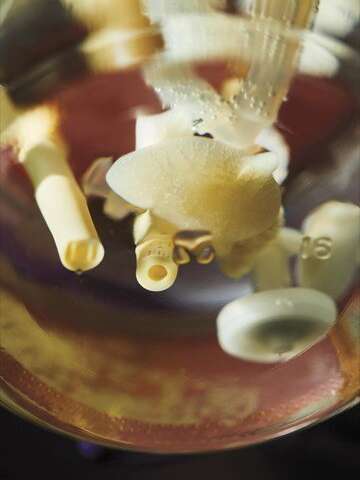 The disembodied living lungs in one Yale researcher’s lab show that a standalone bioengineered lung is well along the road to reality.

Pneumonia, aspiration, fluid in the lungs, and injuries from mechanical ventilators can severely damage the lungs of people who are critically ill. Transplanted lungs are tragically scarce and beyond the reach of most such patients, including those burdened by such chronic lung diseases as cystic fibrosis or emphysema.

What if custom-grown new lungs were an option? The idea sounds like science fiction. But the disembodied living lungs in one Yale researcher’s lab show that a bioengineered organ is well along the road to reality.

“Our understanding of how the lung is put together is growing very rapidly right now.”

Trained as an anesthesiologist as well as a bench scientist, Niklason spent years in the ICU witnessing the devastating results of lung infection and damage. “Many organs heal, but after severe injury, lungs tend not to,” she says. When she arrived at Yale in 2006, she began working on lung regeneration; the possibility seemed even more far-fetched then than it does now.

Four years later, her team transplanted a regenerated lung into a rat; it performed effective gas exchange, albeit briefly. The achievement made it into the pages of Science in June 2010.

There are not nearly enough transplantable lungs available for the people who need them. Only about 15% of cadaveric donors provide usable lungs, in part because many patients linger on ventilators and accumulate lung damage, including infections, prior to death. (Contrast that with the 88% harvest rate for cadaveric kidneys.) Lungs also don’t take kindly to transport and typically have to be transplanted within a few hours of harvest.

In addition to the tight supply problem, lung transplant recipients face a lifetime of immunosuppressive drugs to prevent their bodies from rejecting the donor lungs. A lung engineered from the patient’s own cells could circumvent the immune system and spare patients the risks of long-term immunosuppression.

Fortunately, the lung makes for a more feasible bioengineering challenge than does a solid organ like a kidney or heart. The lung is mostly empty space, comprising a protein skeleton coated with thin cell layers that exchange oxygen and carbon dioxide.

The first step to building a new lung is to partially dismantle an existing one. Niklason’s team has developed a reliable method using detergents, salts, and enzyme solutions to remove the cells from an adult lung. Leaving that skeleton and its dozens of attached protein types intact is crucial. These proteins vary from one part of the lung to another, and they send signals that direct what kind of cells a progenitor cell landing on them will become.

The second lung-regeneration step is to wash the protein skeleton with hundreds of millions of new cells that lay down fresh airways and blood vessel linings. If step one has left the proteins intact, the cells should in theory find their way to the right place.

“There are zip codes that are built into the matrix of the lung,” says Micha Sam Raredon, an MD/Ph.D. candidate in Niklason’s lab. “If you seed a homogenous set of cells … depending on where they fall on the scaffold, they’re going to get site-specific cues that can push them toward a certain phenotype.”

“Getting the cells there, physically getting them there, is much easier. Getting them to behave and to do what you want them to do—that’s the tricky part,” Niklason says.

The new lung grows in a glass jar that bristles with tubes and connectors. Custom-made by the university’s in-house glassblowing team, these so-called bioreactors suspend the growing lungs amid fluid that flows rhythmically around them. One set of tubes pumps the fluid through the lung vasculature as the heart would; another carries fluid away to be oxygenated as it would be by a placenta.

“Proper breathing motion is certainly critical for actually getting our lungs to form and getting the cells to differentiate the way they should,” Niklason says. “We’re mimicking the embryonic state of lung development.”

“It looks exactly like what you’re picturing,” Raredon adds. “They’re these pulsing organs in a glass jar that we’re keeping alive.”

END_OF_DOCUMENT_TOKEN_TO_BE_REPLACED

END_OF_DOCUMENT_TOKEN_TO_BE_REPLACED
We and our partners use cookies on this site to improve our service, perform analytics, personalize advertising, measure advertising performance, and remember website preferences.Ok