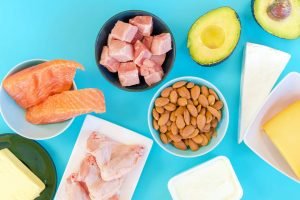 The keto diet hype shows no signs of slowing: The low-carb regimen is still massively popular, with celebs like Al Roker and Jenna Jameson crediting the diet for serious weight loss in recent months.

It’s easy to see why a diet that promises quick results—and that technically allows you to still enjoy foods like burgers and cheese—would be so tempting. But before you try it, it’s important to realize that keto can also have its downsides and that there’s a lot health experts still don’t know about its long-term effects on the body.

Following the keto diet for an extended period of time can be difficult, and even some of its top proponents warn against sticking to its strict guidelines (like cutting back carbohydrates to 50 grams a day or less) for more than 30 to 90 days. Other researchers warn that sticking to the diet long-term could even be dangerous. Here are a few reasons why.

Low-carb diets could lead to vitamin or mineral deficiencies

Limiting carbs to 50 grams a day or less likely means you’re cutting out unhealthy foods like white bread and refined sugar. But it also means you may have to cut back on fruits and certain vegetables, which are also sources of carbohydrates.

That’s a concern, says Annette Frain, RD, program director with the Weight Management Center at Wake Forest Baptist Health, especially if someone is spending more than a few weeks on this type of diet. “Fruits and vegetables are good for us; they’re high in antioxidants and full of vitamins and minerals,” she says. “If you eliminate those, you aren’t getting those nutrients over time.”

It may also be hard to get enough fiber while you’re cutting back so severely on carbohydrates, since whole grains are one of the biggest sources of this important nutrient. That can lead to digestion problems (ranging from constipation to diarrhea), bloating and weight gain, and even elevated cholesterol and blood pressure.

It may affect your athletic performance

There’s no shortage of athletes who have jumped on the keto bandwagon, but some researchers worry that they could actually be sabotaging their strength and fitness. In a recent study in the Journal of Sports Medicine and Physical Fitness, researchers found that participants performed worse on high-intensity cycling and running tasks after four days on a ketogenic diet compared to those who’d spent four days on a high-carb diet.

The body is in a more acidic state when it’s in ketosis, lead researcher Edward Weiss, PhD, associate professor of nutrition and dietetics at Saint Louis University, previously told Health, which may limit its ability to perform at peak levels.

Relaxing the rules can cause weight re-gain

Because the keto diet is so strict, many variations of the diet recommend incorporating several stages. The first stage, usually the first one to three months, is extremely low-carb and allows for very few “cheat days,” if any at all. It also requires keeping close track of your carbohydrate and fat consumption to ensure your body is entering ketosis.

But then, people may transition to a more relaxed form of keto that allows for more carbohydrates or less monitoring—sometimes known as lazy keto, keto cycling, or “maintenance mode,” as Jenna Jameson has called it. The problem here, says Frain, is that weight re-gain is almost inevitable.

“Keto can be a great jump-start to weight loss, but the reality is that most people can’t adhere to it for very long,” says Frain. “Often, people are going into ketosis and losing weight, then coming out and gaining it back and falling into this yo-yo pattern, and that’s not what we want.” In addition to being extremely frustrating, she says, these types of weight fluctuations are also linked to a higher risk of early death.

The type of weight you gain back is important as well. If you lost weight when you first started on keto, you likely lost some muscle mass along with fat tissue, says Kristen Kizer, RD, a nutritionist at Houston Methodist Medical Center. Now, since you’re following a high-fat diet, you will probably gain back more fat and less lean muscle—which not only looks and feels different on the body, but also burns calories at a slower rate. This can affect your metabolism and make it more difficult to lose weight again in the future.

It may also damage blood vessels

Enjoying a “cheat day” in the short-term on the ketogenic diet can also have long-term consequences, say researchers from the University of British Columbia. In a recent study published in Nutrients, they found that indulging in a high-sugar treat (like a large bottle of soda) while on a high-fat, low-carb diet can actually damage blood vessels.

“My concern is that many of the people going on a keto diet—whether it’s to lose weight, to treat type 2 diabetes, or some other health reason—may be undoing some of the positive impacts on their blood vessels if they suddenly blast them with glucose,” said senior author Jonathan Little, associate professor in the School of Health and Exercise Sciences, in a press release. “Our data suggests a ketogenic diet is not something you do for six days a week and take Saturday off.”

Too much fat can raise chronic disease risk

Health experts worry about how a long-term keto-style diet can affect the heart and arteries. A not-yet-published study, presented at the American College of Cardiology’s annual Scientific Session, found that people on low-carb diets are more likely to develop atrial fibrillation (AFib) compared to those who eat moderate amounts of carbohydrates. AFib is the most common heart rhythm disorder and raises the risk of stroke and heart failure.

It’s not just the heart they’re worried about either. Research presented earlier this year at the European Society of Cardiology Congress found that people who followed low-carb, high-fat diets had an increased risk of dying from cancer and all other causes during the study period. And a recent study in the Lancet also found that low-carb dieters who consumed large amounts of meat and dairy had a higher risk of early death compared to those who consumed carbs in moderation or who consumed mostly plant-based protein.

Most of this research, it’s worth pointing out, is still observational—meaning that it’s only been able to find associations with certain health outcomes and not cause-and-effect relationships. Frain says that, overall, there’s not enough long-term research to know exactly what the ketogenic diet does to the body over an extended period of time—or why it seems to affect some people differently than others.

But she advises anyone who’s thinking about trying keto to strive for balance, not for extremes. “It’s important to look at what you’re missing in a diet and what is really sustainable for you,” she says. “You want to make sure you have satisfaction and satiety from the foods you’re eating and that you feel good and are getting great nutrition from a variety of foods. That’s what will help you keep it up and keep the weight off.”

To get more diet stories delivered to your inbox, sign up for the Balanced Bites newsletter