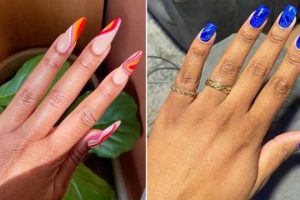 On November 23, 2020, three young nail-obsessed Black women from Atlanta and D.C. launched an Instagram page. Their brainchild, @BlkGirlNailfies, is a corner of the internet devoted to Black nail art, a digital space that is specifically committed to creating a community for Black women, by Black women. Despite having only one introduction post at the time, the account gained 1,000 followers almost overnight.

Today, BlkGirlNailfies has nearly doubled its follower count and there are hundreds of posts under its unique hashtag. Although it's a relatively young space, the account's budding community proves that this type of celebration is something Black manicure lovers have been yearning for. The account was born out of a passion and deep reverence for nail art from three friends. Yet, its conception came by chance.

Founders Hana Javelle, Imani Aldridge, and Tyra A. Seals are not influencers or content creators. Aldridge is a product photographer for beauty brands, Javelle is a full-time publicist and project manager, and Seals is an art history Ph.D. student who runs her own editorial agency. But each woman loves manicures, and they're each known amongst their personal circles for posting their own nailfies — shots of one's nails from their own POV — on a regular basis. A few months ago, Aldridge and Seals were playing around with the idea of creating a joint Instagram page to showcase their fresh nail sets, while Javelle was searching for something more like a lookbook.

"I was doing what I do before every nail appointment," Javelle tells Allure. "I was looking through all of my photos and going through people that I follow [on Instagram] for nails. And I was like, it would be really nice if I could make a centralized place other than my photo album to find inspo. I just literally blurted [that] out on my Instagram story. And then Imani hit me up."

The three women conferred on what this vessel for inspiration could look like. Black hands were their starting point. "[The three of us] save designs for our nails on Instagram," shares Seals. "And for the most part, they're always on white or Asian hands." Their shared visions landed on a venture that was community-oriented and rooted in representation.

The triumvirate of nail enthusiasts takes a communal, collaborative approach to posting, which allows each woman to contribute from her own creative wheelhouse. While their roles and duties for the account fluctuate, the joyful mission of BlkGirlNailfies is steadfast: to celebrate Black women and their contributions to and participation in nail art culture.

This celebration is necessary — nail art is a form of expression that holds a special, storied cultural significance within the Black community, most notably when it comes to nail extensions.

Long nails can be traced back to ancient Egypt, a time when women were believed to have worn artificial nails made out of ivory, bone, and gold. The art on those nails acted as signifiers of class, with royal ladies like Queen Nefertiti wearing red polish to symbolize their societal power.

Over time, Black women have played crucial roles in the popularization and cultural evolution of nail extensions. Contemporary icons like Olympian Florence Griffith-Joyner (Flo Jo) and rappers Lil' Kim and Missy Elliott helped cement acrylic nails and bold nail art into the Black aesthetic landscape. However, for generations, Black women who wear their nails long and loud have not been treated as innovators of self-expression — they are instead plagued by classist stereotypes, critiqued, and branded by words like "ghetto" that hold racist and classist connotations.

As these trends entered the mainstream, appearing on the fingers of non-Black stars who are praised for their creative audacity, the Black women who originated the look were generally omitted from the narrative.

In a world of whitewashed Pinterest nail boards and Instagram #nailinspo searches, the very existence of spaces like BlkGirlNailfies rejects the erasure of Black women, past and present, in nail art culture.

While the cultural gravity of Black women's relationships to nail art continually informs their page's purpose, the founders of BlkGirlNailfies didn't start out with an intention to subvert historical narratives. They wanted to have fun.

"Black women always need a sense of community, because there are so many spaces that clearly are not for us," says Javelle. "But things don't always have to be so heavy. In my mind, my priority was: I want this to be fun."

"We want BlkGirlNailfies to be a page where Black women can go [to] find inspiration for their nails and see it on hands that look like theirs," adds Aldridge. "[We] also want it to be a resource, as far as learning about caring for your nails, and eventually we plan to get to a place where we can have a directory for Black-owned nail salons and Black nail techs."

Their overall kindred and artistic visions for the community breed content like interactive colloquial graphics and collaborations with Black illustrators, as well as reposts of their followers' nailfies. The founders also make a point to source nail content from Black nail techs and trendsetters they believe have their fingers on the pulse of the industry, honoring those who are paving the way.

The BlkGirlNailfies feed is vibrant and modern, inspirational and intimate. The potential impact for the page lives in its malleability: its ambition to expand the beauty possibilities for Black women and femmes and its intent to foster genuine community.

"We deserve to have platforms that are exclusively designated for us," says Seals. "We've shared the art form with the entire world for years… so it's important that we have some kind of stake in the aesthetics and the presentation of it. And so far, I think it's been really well received."