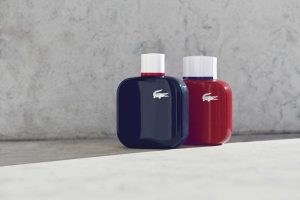 PARIS — Coty Inc. and Lacoste have renewed their long-term fragrance license, WWD has learned. Specific terms of the deal were not disclosed.
Lacoste fragrances became part of the Coty Luxury division at the end of 2016, as part of the acquisition of Procter & Gamble’s specialty brands.
News of the license renewal comes as the race for pole position – which Coty currently holds – in the prestige fragrance market heats up.
“The renewal of our agreement with Lacoste demonstrates our strong confidence in the success of this partnership and the key role of the brand within our portfolio to fuel future growth,” Edgar Huber, global president of Coty Luxury, said in a statement. “There is a clear synergy between Coty Luxury’s know-how and the exceptional creative inspiration of Lacoste, is synonymous boldness, freedom and a certain French elegance.”
Thierry Guibert, chief executive officer of Lacoste, said that due to the renewed partnership, the company expects “an accelerated growth of our fragrance business in the near future.”
Over the past three years, the Lacoste brand has introduced such fragrance as L’Homme Lacoste men’s scent, and expanded the L.12.12 franchise with the French Panache masterbrand.
In an interview with WWD sister publication WWD Beauty Inc late last year, Huber described Lacoste as a brand with very high future potential. “They are already very relevant for us, but they have a bigger potential to be developed,” he said, naming Tiffany, Chloé, Marc Jacobs and Bottega Veneta fragrances – with licenses part of Coty Luxury – in that category, too.
The Lacoste license’s renewal comes at a time when Coty Inc. is in full turnaround mode under new ceo Pierre Laubies. His strategy centers on deleveraging, rediscovering growth, and building a pride- and performance-based culture, as previously reported.
Coty became the world’s largest premium fragrance player in 2016, when it acquired P&G’s high-end perfume portfolio, which also included brands such as Hugo Boss and Gucci.
Other prestige fragrance labels developed by Coty include Calvin Klein, Balenciaga, Alexander McQueen, Roberto Cavalli and Jil Sander. In 2018, Coty’s luxury beauty net sales advanced 10 percent to $3.3 billion.
Meanwhile, L’Oréal is angling to recapture its first-place rank among prestige fragrance makers. The world’s largest beauty company revealed recently that it is in exclusive talks to acquire the Mugler and Azzaro perfume brands. Last year, the company won the fragrance and beauty license for Valentino and renewed its Giorgio Armani fragrance and beauty license until 2050.
Source: Read Full Article

END_OF_DOCUMENT_TOKEN_TO_BE_REPLACED

END_OF_DOCUMENT_TOKEN_TO_BE_REPLACED
We and our partners use cookies on this site to improve our service, perform analytics, personalize advertising, measure advertising performance, and remember website preferences.Ok