Leonard Lauder on Listening and Leadership 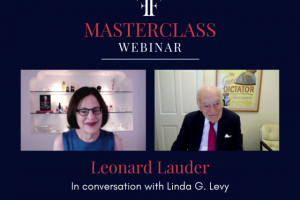 Leonard A. Lauder, chairman emeritus of the Estée Lauder Cos. Inc., might unofficially call himself “chief teaching officer,” but one of his foolproof techniques for success relies less on teaching and more on learning.

“Open up your ears to what other people are saying to you. If you can do that on a regular basis, I promise you, you will always win. That’s a guarantee,” he said on Tuesday afternoon during a conversation with Linda Levy, president of the Fragrance Foundation. The interview, part of the Fragrance Foundation’s Masterclass series and following the publication of Lauder’s book, “The Company I Keep: My Life in Beauty,” traced Lauder’s trajectory from his time in the  Navy to his successful expansion of the family business.

Lauder’s exposure to beauty started young, with his early memories of his mother, Estée, mixing creams in the family’s kitchen. “I first saw my mother in action while sitting in a high chair,” Lauder recounted. “What I learned from those early years with her is the idea of dedication. If you want to make it, you have to keep your eye on the future and keep going.”

Also learned from his mother, a pillar of Lauder’s philosophy is listening to one’s core consumer. “There’s always a woman who has a different way of looking at things. Pay attention to her and listen to her,” he said, adding that one of the lessons in his book is to never make a business decision without a woman at the table.

An early innovation in the history of the Estée Lauder Cos. involved fragrance specifically. “Estée Lauder really was able to convert women from thinking that fragrance was a luxury and was always going to be French. And instead, it sounded like your parents were on a mission to make sure that people thought of using fragrances as they do a lipstick,” Levy said.

Lauder, who spoke to the immediate success of Estée Lauder’s Youth Dew eau de parfum, credits the category’s success — and recent resilience — to human evolution. “Fragrance goes back thousands of years, and it will continue for thousands of years because fragrance is tied in completely with human instinct,” he said. “It’s your natural way of sensing where you are.”

Eventually, Lauder went on to cultivate a sprawling fragrance portfolio with the likes of Tom Ford and Frédéric Malle, whom he sees as visionaries. “I always looked up to them. They’re all creators in their own right, and because of that, they’ve built great businesses,” he said.

Lauder’s approach to fragrance founders mirrored his general approach to his employees. “I made it a point to only hire people who had more talent than I did. I shared with everyone who was better than I thought I was, and you will always find people who are higher and better than you,” Lauder said. “Don’t be threatened by them, embrace them.”

For more from WWD.com, see:

END_OF_DOCUMENT_TOKEN_TO_BE_REPLACED

END_OF_DOCUMENT_TOKEN_TO_BE_REPLACED
We and our partners use cookies on this site to improve our service, perform analytics, personalize advertising, measure advertising performance, and remember website preferences.Ok