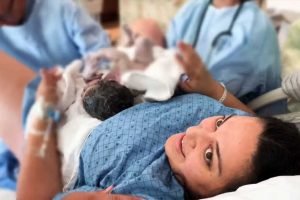 On Wednesday, the 90 Day Fiancé star and her husband announced on Instagram that they had welcomed their second child, a son named Kennedy.

The baby boy made his arrival on Tuesday, May 7 at 9:11 a.m. in a “medicine-free birth,” following nearly 11 hours of labor, which was all captured in a behind-the-scenes vlog on YouTube, the new mom shared.

“Our baby was worth the constractions ?” Kalani wrote on Instagram, poking fun at the way her husband pronounced “contractions” in the video.

In the description of her vlog, Kalani also revealed that she had labored at home for seven and a half hours, before heading to the hospital and continuing her labor for an additional two and a half hours.

“Thank you to the supportive and sweet staff who helped me through another medicine free birth! Happy National Nurses Week to you all! ❤️??” Kalani added.

Kalani and Asuelu first revealed they were expecting another son back in January with a family photo taken in front of a screen displaying her sonogram image.

In March, Kalani opened up to her fans about her pregnancy and revealed that she was struggling “both mentally and physically,” which is why she hadn’t been posting frequent updates.

“I haven’t done many pregnancy updates because I haven’t been doing very well both mentally and physically,” she wrote. “I’m so thankful that my mom’s in town for a while so I can have a break and finally start nesting. I’m fortunate to have such strong women in my life who help me when I’m struggling. Thank you, thank you, thank you.”

Along with the candid post, Kalani shared two videos of her baby bump, where her son could be seen moving around inside her belly.

Most recently, the reality star asked her followers for tips to induce labor naturally, as she was “a few days overdue with this lil beaut.”

Kalani and Asuelu were first introduced to 90 Day Fiancé audiences during season six in October. The pair met while Kalani was vacationing in Asuelu’s home country of Samoa.

Speaking to PEOPLE, Kalani, an Orange County, California, native, said she and her beau “come from completely different worlds.”

“The first time I met Asuelu was when I was on vacation in Samoa. He was the activities director at the resort I was staying at,” she explained. “He kind of semi-stalked me around the resort, but it was really sweet. He’d watch after me when I was swimming in the pool or if I was walking around.”

“Then one of the nights I saw him shirtless and I was like, ‘Okay, this could work,’” Kalani said of Asuelu, who grew up in a small fishing village and had never left his home country. “After my second visit to Samoa to see Asuelu, I felt like I found someone I loved and I wanted to experience [sex] with him. So we did the deed.”

And their “deed” resulted in a little miracle: their first son, baby boy Oliver.

While Kalani was excited about the pregnancy, her family — including her father, who didn’t trust Asuelu — had their own reservations about her new romance.

And though Kalani initially hid her second pregnancy, it appears the drama has all subsided for now, as her father was even featured in Wednesday’s vlog holding his new grandson.

Now with two little ones to raise, the couple is expected to appear on the third season of 90 Day Fiancé: What Now? — a spinoff of the series that follows couples who met on the show and how their lives have unfolded since tying the knot.