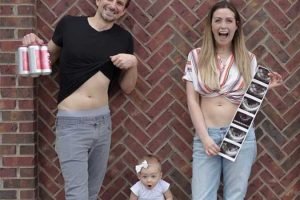 Another Bachelor in Paradise baby is on the way!

Carly Waddell and Evan Bass revealed on Instagram Thursday that they’re expecting their second child together, sharing snapshots of the former reality stars with their 14-month-old daughter Isabella “Bella” Evelyn.

In Waddell’s announcement, Bella is sporting a shocked expression as her parents have their shirts lifted up and Waddell, 33, holds up a strip of ultrasound photos.

“We so SO EXCITED to FINALLY announce Bella’s little brother or sister will be here in November!!! (If you wonder why I haven’t been on social media as much…well, this is why!),” Waddell added.

Bella expertly pulled yet another surprised face for the camera as her dad held her in his arms.

“Ok, so I think I finally figured out what’s causing all these babies,” Bass wrote, joking, “Baby number 473ish coming soon! (Im currently carefully curating this babies Instagram page to be released with ointment line in 2054.)”

The new baby will be the second child for Waddell, joining Bella plus Bass’ three children from a previous relationship: Nathan, Liam and Ensley.

The couple — who met on season 3 of BIP — tied the knot in June 2017 in the same place they fell in love: Puerto Vallarta, Mexico, televising their wedding on season 4 of the ABC reality series.

Puerto Vallarta is also where Waddell and Bass found out that they were expecting. In August 2017, the pair told PEOPLE exclusively that Waddell was pregnant with their first child — who was a “surprise.”

“It’s a great little miracle,” she told Entertainment Tonight. “I was a little late … We took a pregnancy test in Mexico, and we saw the thing [in Spanish] and were like, ‘What does that even say?’ So we Googled it.”