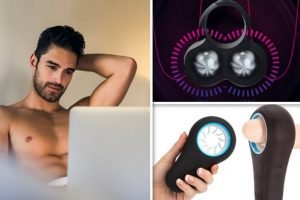 More men than ever are buying sex toys, research from Hot Octopuss reveals.

The adult retailer reveals that blokes made up 80.5% of their purchases in the last 12 months.

So which toys are the most popular with blokes?

If you’re looking to try a male toy for the first time, these products could be of interest.

From vibrating penis rings to oral sex simulators, there really is plenty of choice on the market at the moment.

Hot Octopuss’ Jett describes its self as the “first ever Guybrator”.

It can be worn against the frenulum, a sensitive zone located just below the tip of the penis.

The hands-free device is comprised of two bullets that vibrate against the shaft.

Customers have the option to set their speed, which allows them to set the pace and intensity of their orgasms.

It is driven by two super strong Power Motors, which fire up vibrating pads in the tip and middle of the device.

Blokes have the choice of three different intensities and eight hot rhythms, so they can pick how slowly or quickly they want to build up to orgasm.

It also features a wide opening, making it user friendly when you are ready for action or not fully erect.

Lovehoney’s kinky toy is another device that replicates oral sex.

The gadget’s maker says the waterproof device offers men the “ultimate joy” on tap – and it’s so small you can carry it in your pocket.

This male masturbator has been designed to mould to your penis.

The inside is textured with different ridges and shapes, creating a pleasurable surface for your member to rub up against.

To use it, simply slide it up and down the shaft in hand job motions.

When you’re done, the device is easy to clean as you can wash it and use the case as a drying rack.

Kinky toys don’t just have to be for solo use.

Chaps can spice up their sex lives by snapping up a penis ring.

As well as pleasuring men, it features a metallic panel that’s been added to stimulate their partners too.