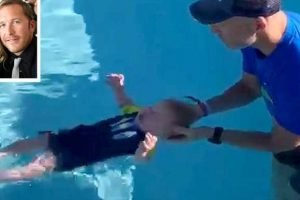 Morgan Miller is opening up about the emotional moment she watched her youngest son’s swim lessons.

Nearly one year after Morgan and her husband Bode Miller‘s 19-month-old daughter Emeline Grier tragically drowned in a backyard pool, the couple brought their 6-month-old son Easton Vaughn Rek to a class to learn how to swim.

While Easton was in the pool on Monday, Morgan, 32, snapped some photos and videos and shared them to her Instagram Stories.

In the post featuring her youngest child, who looked rather content in his black and yellow swim shirt and trunks, she explained that Easton was getting in some water time each weekday for ten minutes.

She also revealed on her story that watching Easton learn how to swim was an emotional moment for her, as the “life-saving skill” may have prevented her daughter from the fatal pool incident last summer.

Want all the latest pregnancy and birth announcements, plus celebrity mom blogs? Click here to get those and more in the PEOPLE Babies newsletter.

“I cried tears of hope watching my baby boy learn this life-saving skill,” Morgan wrote alongside a video of Easton floating on his back while the swim instructor stood behind him and held his head.

“… and then tears of sadness because it was all I had to do to keep my baby girl here,” she heartbreakingly added.

On Tuesday, Easton continued with his swimming lessons which are based on a program called Infant Swimming Resource’s Self-Rescue [ISR] which teaches babies Easton’s age to roll onto their backs and then “float, rest and breathe” until help arrives.

“Day 2,” she captioned a photo of Easton with the ISR swim instructor. “So proud of you baby boy.”

Shortly after the class, Morgan posted another video of her smiling son inside, who laid on his belly wearing a diaper and happily looked up at his mama.

“Did you like swimming lessons? Did you float?” Morgan sweetly asked a smiling Easton in the clip.

The couple’s son Nash, who is 4 next month, also had a swimming refresher. Bode also two children from previous relationships: son Samuel and daughter Neesyn.

The Millers welcomed Easton on Oct. 5, four months after Emeline drowned in a pool in the Coto de Caza neighborhood of Orange County, California.

On Aug. 17, Morgan opened up about her baby girl’s final moments along with a photo of herself cradling her daughter in her arms as Emeline was being given oxygen.

“I wish I could have one more day to hold you, but until that day comes, continue to work through me and give me the strength to bring awareness, my love,” she wrote. “I told you as I held you in this moment that you could still change the world, you could still move mountains.”

“Every step we take forward is because of you and Levi,” Morgan continued. “Your footprint will forever be left on this world. I love you, My baby girl.”

RELATED: Bode Miller Wants to End the “Stigma” Around Pain of Losing a Child After Daughter’s Death

Since then, Morgan has continued to pay tribute to her baby girl and remember her on social media. In November, she displayed a sparkly pink and gold custom painting she had received of Emeline’s heartbeat on a long canvas.

“This is my baby girl’s heartbeat ?The one that pulsed across the screen showing me the gift of life I had growing inside me,” Morgan captioned the photo.

“The one that gave me joy and excitement for the day I was able to hold her in my arms and fall madly in love,” she continued. “That is a moment I want to hold onto forever.”