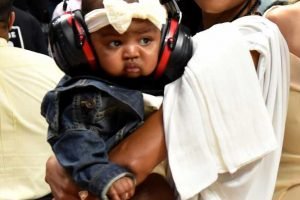 Gabrielle Union‘s journey toward motherhood involved a decent amount of letting go for her to come around to the idea of using a surrogate, eventually welcoming daughter Kaavia James with husband Dwyane Wade in November.

She opens up now in an interview for Shondaland about how she and Wade settled on the decision to use a surrogate after Union suffered multiple miscarriages and failed IVF cycles — and the community they found was an overwhelmingly supportive one.

“A lot of Hollywood people will make an announcement, like, ‘Our baby arrived via gestational carrier,’ but very few are transparent about the whole process,” says the actress, 46. “There’s a fertility grassroots underground community: Once you put it out there within your social circle, they’ll find you.”

“That’s how you get your information: doctors, acupuncturists, different therapies,” she continues. “Once this group of people takes you into their arms, you’re like, ‘Oh, okay! There’s so many of you!’ “

Once Union and Wade, 37, settled on the perfect surrogate for their baby, the day came when they met her. And while the parents-to-be “knew all about her,” their gestational carrier didn’t realize whom she would be working with until she walked in the door.

“[At first], she didn’t know that it was us, although I knew all about her,” says the Being Mary Jane star. “So when we met, she walked in and was like, ‘Oh!’ I didn’t know what that meant, and she was like, ‘I have your book on hold at four different libraries.’ I said, ‘I think I can get you a copy!’ “

“I’d been doing a lot of library appearances with the book, and I love librarians, and here’s this woman who also frequents her local library,” she recalls. “In that first meeting, we talked about the books we love, the stacks of books we want to get through. Little Fires Everywhere, so many more. That, for me, was the sign.”

Union shares with Shondaland that for her and her recently retired NBA legend husband, “Race wasn’t an issue” in selecting who would carry their child.

“For others, if you have a same-race surrogate, there’s a fear of someone running off with your baby,” she explains. “People have all kinds of fears and things that they want. Some want [the surrogate to follow] a specific religion; or to allow TV, or no TV; or they send audio files for the surrogate to play your voice so it can be heard along with the household voices.”

“For us, we wanted: She has her own kids, a husband, she’s done this before, she knew what she was doing,” Union says. “There was no need for us to micromanage.”