Home » Family Health » Hoda Kotb Opens Up About Adjusting to Life as a Mom of Two: 'In a Blink, Life Changes'

Hoda Kotb Opens Up About Adjusting to Life as a Mom of Two: 'In a Blink, Life Changes' 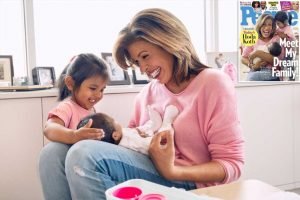 After adopting her baby girl Hope Catherine in April, Hoda Kotb is now a mom of two — but the Today show anchor says her second time around is much different than when she adopted her older daughter, 2-year-old Haley Joy.

“I forgot everything!” she tells PEOPLE in this week’s cover story. “I was like, ‘How do you hold the baby? How do you feed a baby? How do you swaddle?’ I was googling swaddling and — you’re not going to believe this — how to put on pajamas.”

“I just can’t believe how in a blink, life changes, and all of a sudden there are two babies in this house. I’m just overwhelmed with joy,” says Kotb, 54.

Kotb announced her new bundle of joy in a phone call on the April 16 episode of Today.

The outlet shared a photo of the longtime television journalist holding her new addition, with her older daughter Haley standing next to her mama and new little sister with a big smile on her face.

“It’s a girl! And her name is Hope!” Kotb could be heard saying through tears over the phone as her fellow Today personalities wiped their eyes.

With two children to care for now, Kotb tells PEOPLE that she has been able to let go of some the pressure that comes with being a mom.

“My first time around, I spent my whole time going, ‘I got it! I got it!’ ” she says. “I didn’t know what to expect with two. All of a sudden, with two kids, you’re like, ‘Wait, baby one is crying, baby two needs to be put down. Hope is hungry, Haley needs me.’ “

In February 2017, Kotb revealed she had adopted Haley after the baby girl was born on Valentine’s Day that year. In 2007, Kotb battled breast cancer, leaving her unable to conceive. She even told PEOPLE in 2017 that she thought she would never be a mother.

“I felt like, before Haley came, I’d had an average life,” Kotb shares now. “She stepped in it, my heart exploded. And then, all of a sudden, this little girl Hope steps in and you realize how much room there is in there.”

She adds, “You think you’re topped out. But your heart’s ability to expand blows my mind.”

For more on Hoda Kotb’s new life as a mom of two, pick up the latest issue of PEOPLE, on newsstands Friday.