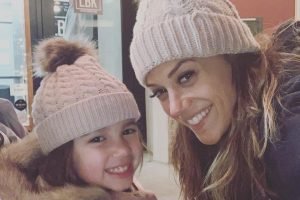 Jana Kramer plans to leverage her own experiences to help her daughter navigate her sexuality in the future.

During E!’s new Mom2Mom episode, out Friday, the actress and country singer opened up to Daily Pop‘s Carissa Culiner about all things motherhood, including how she wants to talk to 3-year-old daughter Jolie Rae about her first time having sex — specifically, that she doesn’t “want her to have the drunken, one-night-stand first-time sex.”

“[I lost my virginity to] my high-school boyfriend. We were together for three years,” said Kramer, 35, who is married to Mike Caussin. “I loved him, and I’ll never regret that. Now there are some partners that I do regret because I didn’t love them … but maybe I don’t regret that. I don’t know.”

“With [Jolie] I’m like, ‘The first time, just make it be someone that you care about,’ ” she added.

Brooke Burke on Having the Sex Talk With Your Kids

Kramer also dished about her difficult road to motherhood that included five pregnancy losses and multiple in vitro fertilization treatments.

“The advice is hard because people would say, ‘Don’t stress, it’s gonna happen in time,’ and it’s easy to say that but it’s so hard to say that to someone who’s going through it right now,” explained the One Tree Hill alum.

“Two nights ago I had a middle-of-the-night feeding with [son Jace Joseph, 3 months] and I was going through videos and trying to clear out my phone, and I saw the videos of when I did my YouTube docu of us losing the baby. But I thought it was really important to show that,” Kramer said.

“I was looking at those videos and I was like, ‘Man, if I would’ve known [then] where I’m at today, I would’ve trusted the process a little bit more,’ ” she continued. “But in that moment I was like, ‘I’m never having kids. God’s not gonna let me be a mom again. … But it’s gonna be okay and it will happen, trust me.’ ”

Kramer puts her children’s safety and well-being first as a mom, but admits she “[wants] them to know that they’re my friend, too” — a relationship she inherited from her own mother.

“I felt like I could go to my mom and talk to her about anything,” the podcast host told Culiner in their Mom2Mom interview. “And I want the same thing for my kids.”

“I’m also going to be very strict with them too but I want them to know they can come talk to me as a girlfriend, ’cause I love it. My mom was my best friend,” Kramer said.