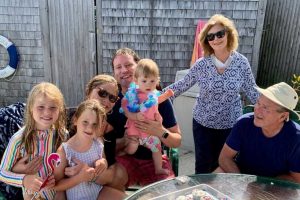 Childcare is a team effort as far as Jenna Bush Hager is concerned.

In her new book Everything Beautiful in Its Time, the Today show co-host recalls a conversation she had with her mom Laura Bush, in which the latter praised her son-in-law Henry Hager for being home with the couple's children while Bush Hager was speaking at a women's panel in Dallas alongside her mother and sister Barbara Pierce Bush.

"My mom told the audience, 'Our son-in-law Henry is a saint. He's home with the kids while Jenna is here,' " says Bush Hager, 38, who shares three children with her husband of 12 years: son Henry "Hal" Harold, 13 months, plus daughters Poppy Louise, 5, and Margaret "Mila" Laura, 7.

"There is an unwelcome undertone to her portrayal of Henry as a saint," she adds. "The corollary is that being married to me is akin to the martyrdom experienced by the saints."

"I have been to church. I know what some of those saints endured. Comparing marriage to me with the torments undergone by the holy stings a bit," Bush Hager continues. Mila this morning: Mom, it doesn’t seem like Easter this year. Me: Why baby? M: well, we aren’t leaving the house. We don’t get to see Mimi and Bumpy. We are watching church instead of going.” And so we got dressed up and we cooked and prayed around the table, grateful. Thankful for a beautiful world and a God that loves us so much. Then after lunch Mila said, “Mom, this is the best Easter ever….because Hal is here.” And I thought that’s it baby girl—it isn’t about where travel , or parties full of people, it is about the greatest and most simple gifts like their baby brother on his first Easter. We are praying of those who feel alone, lonely. Those who have lost hope. May you find joy and comfort knowing you are loved.

Happiest Mother’s Day to my mama—and her mama (my Grammee) who we lost a year ago today. Grammee taught us every constellation in the sky and to love the tiny creatures of West Texas. My mama taught me how to be a mom. Love you mama.

"What's more," writes Bush Hager, was that "the context of the Dallas speech was rather ironic."

"There we were, ostensibly discussing the power of women. My mother was describing my husband as a martyr for doing basic childcare," she remembers.

Bush Hager describes her response as one of surprise: " 'Mom!' I said. 'This is not the fifties! Henry is not a saint just because I travel for work. Besides, he is not at home with the kids, mopping the floors and ironing our sheets. He is at work. The kids are at school.' "

"The audience laughed. Mom smiled and shrugged. There is no arguing with her when it comes to Henry's perfection," explains the former first daughter. "She always said that she'd prefer her children marry an Eagle Scout than marry a prince. Henry is an honest-to-goodness Eagle Scout." Bush Hager admits she has also outlined her responsibilities as a parent to her own children, remembering a "wake-up call" when her younger daughter Poppy once asked her, " 'Mommy, is there a babysitter, or are you going to be babysitting us tonight?' "

" Oh no. Was I going to be mothering them tonight? In fact, I was supposed to go out," Bush Hager reveals. "But what was I supposed to say to my baby: 'No, no mothering for you'?"

" 'Yes, I will be mothering you,' I said, as I picked up the phone to cancel my plans," she adds.

Everything Beautiful in Its Time: Seasons of Love and Loss is available now on amazon.com.