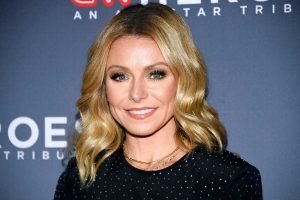 On Monday, Ripa welcomed Andy Cohen on Live with Ryan and Kelly to co-host the morning show with her in the place of Ryan Seacrest.

The pair eventually got chatting about Cohen’s new little boy Benjamin Allen, who made his arrival earlier this year, and the recent visit that Ripa’s family had with the 2-month-old.

While recalling her time with Benjamin, Ripa, 48 — who’s already mom to Michael, 21, Lola, 19, and Joaquin, 16 — admitted that seeing the little baby made her want to have a fourth child with husband Mark Consuelos.

“I was putting it out there for [Mark] last night,” she admitted during Monday’s episode of her conversation with Consuelos, 48. “He was like, ‘It’s alright. Let’s be grateful for what we have.’ “

“And then he put on Game of Thrones and fell asleep, which was the anti-aphrodisiac,” Ripa joked.

RELATED: Andy Cohen Is “Digging the Dad Gear” on a Private Flight with 4-Day-Old Son Benjamin

But Ripa isn’t the only woman that has gotten baby fever because of Benjamin, according to Cohen.

“He is causing women all over my life to start re-ovulating,” the Watch What Happens Live host, 50, joked. “Kelly came over, her body was responding in ways — I was like, ‘Whoa!’ … I do have to calm the ladies down a little bit.”

Added Ripa: “He really does make me want to have another baby. He’s confused me into thinking [I want another].”

“I can tell,” the new dad quipped back.

“I was in the delivery room,” Cohen told PEOPLE and Entertainment Weekly’s former Editorial Director Jess Cagle of meeting his son for the first time.

“I had been hoping that he would have a full head of hair, and he really overdelivered,” the Bravo personality teased. “That was the first thing you see, the head of hair coming out. And I was amazed.”

After Cohen “cut the umbilical cord” himself, doctors cleaned Benjamin off and brought him over to the new dad, who then went skin-to-skin with his newborn for the first time.

“He was so alert for the first two hours. His eyes were wide open. He didn’t cry; he was just calm,” Cohen recalled to PEOPLE. “I kind of have no words for it.”

Ripa eventually met Cohen’s little bundle of joy a few weeks later on Feb. 28, sharing two snapshots of the pair to her Instagram. “Deeply in love❤️❤️❤️❤️ thank you @bravoandy for bringing such joy to the world,” she captioned the sweet shots.

Cohen, who has been good friends with Ripa for years, previously revealed to PEOPLE that the mom of three had provided some guidance and advice ahead of his little boy’s arrival.

In May 2017, the Bravo star gushed about Ripa to PEOPLE.

“She’s smart,” he said. “She’s been doing that show for a long time. She’s a business woman, a great mom and just don’t underestimate her.”

Though Ripa may not currently have a baby of her own, she’s likely to get in plenty of quality time with Benjamin, considering Cohen previously shared how he will ensure that his son grows up “surrounded by as many women as possible.”

“Women have played such a key role in my life,” he told PEOPLE. “My most important relationship has probably been with my mom. He will be surrounded by women. He needs it. We all need it.”

“I have a swarm of women around who are ready to love on this boy,” he added. “I know I couldn’t do it without them.”