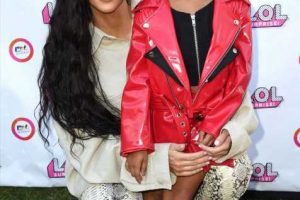 North West has found a new obsession after her dad Kanye West banned her from wearing makeup.

Speaking with Allure magazine at her KKW Beauty launch in Ulta stores, Kim Kardashian West revealed that North, 6, is still trying to get as close to playing with makeup as she can get by turning her attention to skincare.

“She’s found it really fun to do a face mask,” Kim, 39, said of her oldest child. “I’ll get her sheet masks, and if she’s having a sleepover, I’ll do a mask with the girls. They think it’s so funny for some reason. I don’t know why. They just think they’re so fascinating.”

Fans of the Kardashian clan know that North loves playing with makeup — she’s been featured on her mom and aunts’ social media accounts wearing makeup several times — but Kanye has put an end to it, at least until she’s a teenager.

“I think he had it, he changed all the rules,” Kim said, speaking with E! News during her KKW x WINNIE makeup collaboration dinner in New York City last month.

“So, I kind of got in trouble for that,” Kim said of Kanye’s reaction. “So, it’s now no more makeup.”

Just last week, Kim said that the new rule is still a point of contention in their household.

“North is trying to get in on the makeup but she’s being blocked heavily because her dad has stopped all makeup for her until she’s a teenager,” she told E! News. “So it’s a big discussion, a big fight in the household right now, but it’s what is best.”

Kim added that a big part of the power struggle is that North watches her mom put on makeup and wants to join in — perhaps one of the reasons that Kim will do face masks with her six-year-old.

“As a parent, you just learn and figure it out as you go, and we realized we didn’t really want her to wear makeup at a young age, but she sees her mom putting on lipstick and lip gloss,” she said.

END_OF_DOCUMENT_TOKEN_TO_BE_REPLACED

END_OF_DOCUMENT_TOKEN_TO_BE_REPLACED
We and our partners use cookies on this site to improve our service, perform analytics, personalize advertising, measure advertising performance, and remember website preferences.Ok