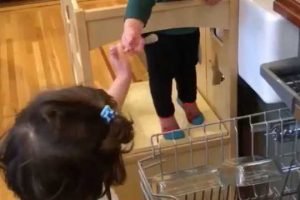 Mark Zuckerberg‘s got a couple of pro household helpers on his hands!

The Facebook founder and CEO, 35, couldn’t resist showing off his daughters’ mad skills (and sweet cooperation!) in a video he shared to his social-media platform on Sunday.

In the cute 15-second clip, 20-month-old August stands at the sink and rinses dishes with the help of her mom, Dr. Priscilla Chan, before handing them to big sister Maxima “Max,” 3, to load into the dishwasher.

From Paternity Leave to Fertility Struggles: Inside Mark Zuckerberg’s Life as a Dad

While some household tasks are best performed with good-old-fashioned teamwork, the proud husband and father has a habit of leveraging technology to make day-to-day life more efficient for his family of four.

Last month, Zuckerberg revealed he had invented something he calls the Sleep Box — a small wooden box that sits atop his wife’s nightstand and puts out a dim light between the hours of 6 and 7 a.m. — to help Dr. Chan sleep at night, since “Being a mom is hard” and makes getting quality shut-eye quite the challenge.

“As an engineer, building a device to help my partner sleep better is one of the best ways I can think of to express my love and gratitude,” he wrote. “A bunch of my friends have told me they’d want something like this, so I’m putting this out there in case another entrepreneur wants to run with this and build sleep boxes for more people!”

Taking a leaf out of Tony Stark’s (a.k.a. Iron Man’s) book, Zuckerberg previously designed an artificial-intelligence unit to help run the home he shares with Dr. Chan, 34, and a then-1-year-old Max. The system’s name? Jarvis, after the fictional genius engineer’s own in-home AI.

But unlike Stark’s Jarvis (who is voiced by Paul Bettany and later evolves into the hero Vision), the Zuckerberg home enjoyed the dulcet tones of everyone’s favorite voice-over actor: Morgan Freeman. The real-life Jarvis could also let Max’s parents know when she is awake — and teach her Mandarin in the meantime.

“Jarvis, your Mandarin is so soothing,” Zuckerberg told the system as he entered his daughter’s room to demonstrate how it worked in conjunction with Max’s morning routine.

“Xièxie,” Jarvis answered, which roughly translates to “Thank you” in Mandarin.