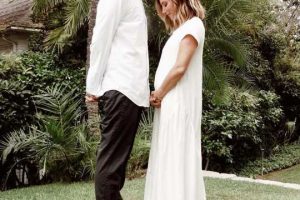 Ashley Tisdale is opening up about her pregnancy.

The former High School Musical star, 35, got candid about her journey to motherhood in a blog post published on Friday, writing that "it hasn’t been an easy first trimester" as she expects her first child with husband Christopher French.

"IM PREGNANT!!!!" she began. "Wow, it feels so good to finally share this news with you guys! Where do I even begin?"

"I’ve had my highs and lows during quarantine and have to say I’m so grateful for this gift," Tisdale wrote. "It hasn’t been an easy first trimester, but everyone is different and I know there are people who’ve had it way worse. I definitely fall somewhere in the middle where I didn’t just have nausea, but threw up a couple of times and felt like I’ve had stomach flu for three months (Lol!)." In her post, the actress also revealed why she waited to expand her family, sharing that it's been "the question from everyone since I got married."

"At first, I rebelled against it, and like clockwork, after I got engaged EVERYONE (and I mean everyone!) asked when I was getting married. Then, once I was married, everyone was asking when I was having kids," she said. "To be honest, it just felt invasive."

"I wasn’t ready for that step yet and I wanted to be selfish and have Chris all to myself for a while. Honestly, I wouldn’t have had it any other way," she continued, adding that "going through my mental health journey, it wouldn’t have been the right timing for such a huge life change."

"I’m not naive about how a baby changes everything as I have a niece and plenty of friends with kids. I’m glad I worked on myself before we decided to make this decision," Tisdale wrote. "After six years of marriage, we built a strong foundation, and the timing just felt right. I gave it to God and the universe and honestly didn’t feel stressed about it and then it happened very quickly."

The Disney Channel alum added that she's "excited" about becoming a mom.

"I’m excited about this new adventure, and I’m being very optimistic with every step," she shared. "Chris and I are so excited and are fully embracing and celebrating this monumental moment. I love you guys and I’m so excited to have you part of this ride!"

Tisdale and French announced the pregnancy on Thursday on their respective Instagram accounts.

In an image posted to Tisdale's page, she and French stood together while wearing white and looking down toward her bump. Another shot showed the expectant star cradling her stomach as the pair smiled at each other. French also shared a photograph of the couple cuddling up together. Choosing to let the photos speak for themselves, they both shared the exciting news without including captions.

Tisdale, who tied the knot with French in September 2014, recently opened up about her relationship with musician, telling PEOPLE that spending so much time together amid the pandemic has only solidified their bond.

"He's a really great guy," she said. "We're lucky because we're very independent people, but we love spending time and hanging out together."

"Being in quarantine together, it's still that easy. It's still hanging out with your best friend," Tisdale added.