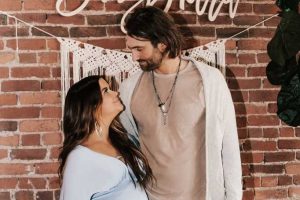 Maren Morris is ready for her son’s arrival!

With just days left to go before her due date, the pregnant country star shared a playful video of herself dancing around her Nashville home as she joked about how it was about time she welcomed her first child already.

In the fun clip, Morris, 29, twirled around while holding her baby bump as she listened to Harry Belafonte’s calypso classic, “Jump in the Line (Shake, Senora).”

“Harry Belafonte issuing an eviction notice for this baby,” the mom-to-be jokingly captioned the video.

Never miss a story — sign up for PEOPLE’s free daily newsletter to stay up-to-date on the best of what PEOPLE has to offer, from juicy celebrity news to compelling human interest stories

“The irony is just too rich that after a year of living in the GIRL headspace, the universe would give us a baby boy to even things out,” Morris wrote on Instagram at the time. “See you in 2020, little one.”

Morris played her final show as a mother-to-be earlier this month, and joked that the excitement of being on stage might make her go into labor early.

While taking the stage at the Houston Livestock Show and Rodeo, the star shared that her son on the way was kicking — and was seemingly already a fan of the Lone Star state.

“If I go into labor during this show, it’s all good because it just means that my kid really wanted to be born in Texas,” she told the crowd, according to the Houston Chronicle.

“He’s kicking. He knows that my adrenaline is on full blast,” Morris added.

And her husband Hurd also can’t wait to be a parent.

The dad-to-be recently stopped by PEOPLE Now and opened up about preparing to start the next chapter of his life.

“I’ve never done this before, but I’m really excited,” Hurd, 33, said. “I hope he likes stuff I like to do, and if he doesn’t like stuff I like to do I’ll just figure out what he likes to do and go learn how to like that. I don’t really know how else to be prepared for being a dad other than being like, ‘Whatever we’ve gotta do.’ “