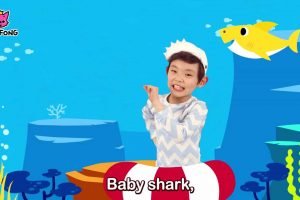 Just in case you haven’t heard enough “Baby Shark” to last you a lifetime, Nickelodeon’s got it covered.

The network is teaming up with Pinkfong’s global entertainment company, SmartStudy, for a series that will leverage the popular children’s tune to create “a terrific original animated series that will bring this property to new heights and even more fans,” says president of Viacom Nickelodeon Consumer Products, Pam Kaufman, in a statement.

“Baby Shark is a multiplatform phenomenon, and appetite for more content and products is strong around the world,” she adds of the joint initiative, aimed at preschoolers.

A video accompaniment for the aquatic-themed earworm for kids was uploaded to YouTube in June 2016 by Pinkfong, an educational brand from South Korea.

The 2-minute infectious clip sees a little boy and girl singing and dancing along to repetitive-sounding lyrics while they tell the story of a family of sharks — a baby, mommy, daddy, grandma and grandpa — who hunt and avoid danger together.

“Baby Shark” has since inspired a bevy of toys, games and more, and even swam onto the Billboard Hot 100 this past January, debuting at No. 32. The video has been viewed on YouTube almost 3 billion times.

SmartStudy’s CEO Min Seok Kim says in the press release that their company is “really excited to be partnering with Nickelodeon to co-produce our first television series about Baby Shark and look forward to bringing our characters from the screen into the real world.”

Added Nickelodeon Animation’s Executive Vice President Ramsey Naito, “At the heart of any popular piece of content is a terrific character, and we have a great opportunity to further explore the world of Baby Shark and follow this family through some great animated adventures on Nickelodeon.”

The news comes just over a week after Nickelodeon released the first promo for the upcoming reboot of Blue’s Clues  — and in addition to a new host, it boasts nifty new animations in the form of its titular dog, now CGI-animated.

Re-titled Blue’s Clues and You, the show will be presented by Broadway star Joshua Dela Cruz. Just like original host Steve Burns, Dela Cruz has a Thinking Chair, a Handy Dandy Notebook and friends like Tickety Tock, Mr. Salt and Mrs. Pepper, Mailbox and Magenta.