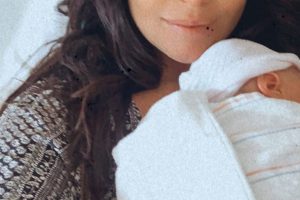 Robertson, 36, announced her engagement to Preciado and the news of their baby boy on the way simultaneously in December, sharing a photo of the couple holding up a onesie that read "I [heart] NY." In addition, the then-mom-to-be included a close-up of her diamond sparkler.

"Happy Holidays from the three of us 🥰," she captioned the post. "I can't wait to marry this man, with our son there 💙 Easiest 'YES' I've ever said 💍."

Over the months that followed, Robertson gave her followers glimpses at both her growing baby bump and wedding-planning process, revealing in January that she'd chosen her dress for the big day and unveiling the couple's save-the-date card the following month.

"I love going to weddings 🥰 So pleased with the way our save the dates turned out 💌 👰🏻🤵🏻," she wrote alongside the card, which revealed that she and Preciado would be tying the knot this October in the Tlaquepaque area of Sedona, Arizona.

Robertson competed for (and won) the heart of Ben Flajnik on season 16 of The Bachelor in 2012, but following their engagement, the two ultimately split seven months later. She went on to date future Bachelor Arie Luyendyk Jr. on and off for years prior to him starring on the series' 22nd season in 2018.

She began dating Preciado in 2019, celebrating their one-year anniversary as a couple with a sweet Instagram tribute this past April that read, "La Dolce Vita ❤️ Here's to 365 days of pure happiness. What a difference a year makes."

Shortly following the news of their engagement and bundle of joy on the way, Robertson told PEOPLE that she and her beau "got serious pretty quickly" after he messaged her on social media — and "getting pregnant was something we had discussed. It wasn't a total shock."

"I truly never believed in 'when you know you know' until I met Humberto," she added. "It's all been so seamless. Before I met him, I was at the point where I started to lose hope. But he's been everything I ever dreamt of. And I'm so glad we waited to find each other."

END_OF_DOCUMENT_TOKEN_TO_BE_REPLACED

END_OF_DOCUMENT_TOKEN_TO_BE_REPLACED
We and our partners use cookies on this site to improve our service, perform analytics, personalize advertising, measure advertising performance, and remember website preferences.Ok