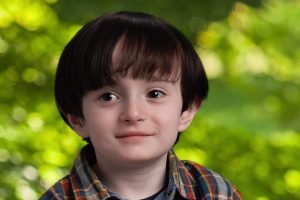 Angela and Randy Tindell tried to get pregnant for nine-and-a-half years. They saw fertility specialists but never tried assisted reproductive treatments like IVF, which can cost thousands of dollars. “There was no way I could pay the kind of fees they charge for that,” Randy tells Health. The Tennessee couple had pretty much given up after nearly a decade of trying to conceive. “We were content just being married to each other,” Randy says.

Then he woke up in the middle of the night to find Angela crying in the bathroom. “The [pregnancy] test has got two lines on it. We’re pregnant,” Angela told him that evening. Angela gave birth to the couple’s son, Jackson, six years ago when she was 42.

Jackson was born premature. Angela’s water broke when she was just 24 weeks pregnant, and Jackson was born months ahead of schedule on September 29, 2012. He spent the next three months in the NICU at the University of Tennessee. His prognosis wasn’t good. He had to use a feeding tube, and he had trouble hearing out of his left ear.

Randy works as an accountant, and his health insurance covered the cost of his son’s hospital stay. Jackson was discharged on December 31, 2012. The University of Tennessee case manager working with the Tindells advised Randy and Angela to apply for TennCare for Jackson. TennCare is Tennessee’s Medicaid program. Randy went to the local Social Security Administration office on the first business day of 2013 to apply for disability for his son. The person he spoke with there had some bad news for him: “You’re basically a day late.”

The University of Tennessee case manager had failed to inform Randy and Angela that they needed to apply for TennCare for Jackson before their son was discharged from the hospital. That one failure on the part of the university has cost the Tindells thousands of dollars.

Jackson, now 6, still requires a feeding tube. He is autistic and nonverbal, and he needs both occupational and speech therapy. Randy’s insurance only covers so many sessions with the two therapists Jackson works with each year. In order for Jackson to truly thrive, he requires more therapy sessions than his father’s company’s insurer will pay for.

“By the time you hit mid-March, insurance won’t pay anymore. The occupational therapist—her visits were up in April,” Randy explains. This means the Tindells have to pay for the rest of Jackson’s sessions for the rest of the year. Their insurance costs $13,000 a year, and their out-of-pocket maximum, which, Randy says, they always hit, costs $13,500.

That said, the Tindells spend at least $26,500 each year on health care for their son, in part because nobody told them to make sure Jackson had applied for TennCare before he was discharged from the hospital. Of course, even if their son did have TennCare, they’d still have to pay exorbitant medical fees. But it wouldn’t be as bad as it is now.

A doctor recently gave the couple some unexpected advice on how to lower the cost of Jackson’s medical bills; she told them to get a divorce. The reasoning is simple: Randy and Angela make too much money to qualify for TennCare assistance for Jackson right now.

I’m not sure if I’m hearing this right, Randy thought when the doctor proposed this idea. But he was. The doctor advised them to get a divorce because then Angela, who can’t work in part because she cares for her disabled son, could qualify for TennCare. The doctor said to them, “I’ve told a lot of my other patients, ‘You’re best bet is to get a divorce.'” She told Randy, “What you can do is get an apartment down the street. You need another physical address. Then you basically don’t pay any of their support. Then they would both qualify for TennCare because they have no source of income.”

The couple decided that getting a divorce wasn’t the best route for them. “My beliefs won’t let me do it,” Randy says. He said he refused to divorce his wife to “get bills paid.”

Randy and Angela’s story highlights the crippling cost of health care in America. Randy, who describes himself as middle-class, tells Health about a bill that would have helped his family tremendously had it not been recently rejected by Tennessee lawmakers earlier this month. It’s called the Katie Beckett Waiver, and it would have meant that Jackson could get TennCare disability assistance even though his parents make more than $35,000 a year. The waiver could have helped provide disabled children with the medical care they need prior to a child turning 18, at which point they can draw disability regardless of their parents’ income.

“These children need the money. It could make a difference in their developmental years. Last week Governor [Bill] Lee did not provide any funding for that waiver,” Randy says.

Tennessee couldn’t scrape up the funding for the benefit of disabled children this time around, but Randy says the fight isn’t over. He’s continuing to push for this policy change, which would benefit families with disabled children all over Tennessee. Says Randy: “We’re not looking for a handout. We’re working. We just need a little help. There needs to be assistance here.”