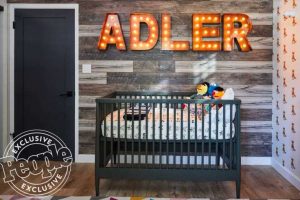 Although Danielle Fishel and husband Jensen Karp have been vocal about their decision to maintain son Adler Lawrence‘s privacy, the couple also want to raise awareness around the struggles parents and babies who spend time in the neonatal intensive care unit can face.

In this week’s PEOPLE, on newsstands now, the couple share the first photos of their 10-week-old’s face as they open up about the “extremely scary” weeks they faced following his birth, when he spent 21 days in the NICU due to fluid build-up in his lungs caused by chylothorax, a rare leak in the lymphatic system.

As excerpts from the story were published online, along with their family snapshots, the new dad wrote a lengthy Instagram post explaining why the couple made an exception to their decision not to post photos of Adler’s face.

“Having a baby in the social media era is tricky. For the past year, @daniellefishel and I have struggled with our inner need to show off just how freaking cute our son is (he looks like if Al Michaels was a Glo Worm) and the idea that we know it’s not necessarily fair to him,” Karp, 39, began alongside an image of their son’s nursery.

“We became aware that Adler would have no say over what is being posted of him, or if he’d want to live a public life (like his parents),” he continued. “We also were fearful of comments or replies from troll neckbeards that he would later stumble on, attached to his image — all without his knowledge or approval.”

Karp, an executive producer of Drop the Mic, went on to share that the couple had also decided to “publish our family pictures once” — just not on Instagram.

“To combat the fact that Danielle had paparazzi follow her to our favorite deli and our bank during her pregnancy, we would publish our family pictures once, with a magazine, away from anonymous accounts and tummy tea ads,” he went on in his Wednesday post.

“We felt more in control, and we felt sharing the story of our son’s health issues was important, and an easier explanation once Adler got older,” he continued, adding that “if his picture gets anyone to become more familiar with the struggles of NICU babies and their parents, then it’s a massive success.”

Earlier in the summer, Fishel explained that not sharing photos of their son’s face “wasn’t an easy decision for us.”

“The truth is, choosing not to post pictures of him kinda sucks. I wanna show you my baby every day. He’s cuter than this 👼 but I worry about a couple things,” she wrote on Instagram. “1. His safety. There are weirdos out there. Enough said. 2. Putting pictures and facts about him onto the internet that he doesn’t have any say in. I’d like for him to be able to curate his own footprint on the internet in the future without being mortified we posted about his fear of swimming or his first crush.”

The former Boy Meets World actress added that she also has a good deal of respect for fellow famous parents who have made different choices.

“I look at people like Chrissy Teigen and I *love* how she posts about her kids and I respect her decision. It makes me think I can/should do the same thing. But then I see Kristen Bell and Dax [Shepard] and I respect and understand their decision too!” she wrote.

The Great Social Media Debate: Celebs on Why They Do (or Don’t) Share Pics of Their Kids

However, just because they weren’t showing their son’s face at the moment didn’t mean Fishel and her husband wouldn’t be documenting some of Adler’s adorable moments.

“I’m also not going to not post a beautiful picture of one of my best friends holding my baby for the first time because seeing an emoji over his face ticks you off,” she wrote. “I’m sorry if that offends you but we’re doing the best we can and it’s hard. Being a parent and making decisions for your kid is tough. Fyi, dogs are easier. 🐶❤️”

Now that their son is back home and his lungs have healed on their own, Fishel tells PEOPLE for this week’s issue that “he’s definitely a chill baby.”

“He’s giving us lots of smiles and he’s very strong. He’s holding his neck up, he’s looking around. When he is awake and alert, he makes very intense eye contact. He’s very curious,” the actress says, adding that their son was also born with “an insane amount of hair.”

Like all parents, the couple are also trying to balance enjoying their baby’s first weeks while simultaneously looking forward to all the milestones yet to come.

For more from Danielle Fishel, pick up the latest issue of PEOPLE, on newsstands now.

END_OF_DOCUMENT_TOKEN_TO_BE_REPLACED

END_OF_DOCUMENT_TOKEN_TO_BE_REPLACED
We and our partners use cookies on this site to improve our service, perform analytics, personalize advertising, measure advertising performance, and remember website preferences.Ok