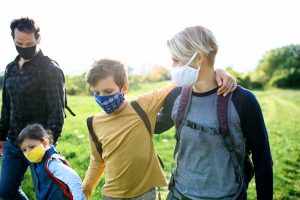 Nearly a dozen people across four states were infected with the novel coronavirus by a 13-year-old girl during a three-week family vacation over the summer, according to a report from the Centers for Disease Control and Prevention.

The teenager, whose identity remains anonymous, was exposed to COVID-19 during a "large outbreak" in June, leading her to take a coronavirus test four days later. She tested negative and was not showing symptoms at the time, the report states.

But two days later, the teen began experiencing nasal congestion, a symptom of COVID-19, on the same day she, her parents and two brothers traveled to a family gathering at an unconfirmed location, where 14 of them stayed in a five-bedroom, two-bathroom house for between eight and 25 days.

The attendees ranged in age from 9 to 72 and belonged to five households in four states: Rhode Island, Illinois, Georgia and Massachusetts, according to the CDC report.

Six additional relatives (an aunt, an uncle, and four cousins) visited for 13 hours during the trip but maintained social distance and stayed outdoors. None of them tested positive for the virus. Including the teenage girl, 12 of the 14 relatives staying at the home – none of whom social distanced or wore masks — began exhibiting COVID-19-related symptoms and were subsequently found to have been infected with the virus.

One of the family members was hospitalized, according to the CDC, while another was treated at an emergency department care for respiratory symptoms. They have both recovered.

After the CDC investigated the cases throughout July and August, the 13-year-old girl was determined to be the "index patient" given that she began showing symptoms prior to any other family member that was infected.

The teen's initial COVID-19 test, done before the trip, was likely a false negative, according to the CDC report, "because it was performed before symptom onset."

The CDC said that the outbreak further proves that children and adolescents can serve as the source of COVID-19 spreading, even when their symptoms are mild. In addition, it shows that lack of social distancing will likely result in further spreading of the virus, per the CDC.

As of Tuesday, there are over 7.8 million confirmed cases of COVID-19 in the United States, while at least 214,900 people have died, according to the New York Times' database.

END_OF_DOCUMENT_TOKEN_TO_BE_REPLACED

The reason you should never put your underwear in the dryer

When it comes to laundry, some people are the sort-by-color, use-the-right-settings type, while others are the toss-it-all-in-and-press-start type. But whichever […]

END_OF_DOCUMENT_TOKEN_TO_BE_REPLACED

Jamie Lynn Spears Auditioned for 'Twilight' While Pregnant: 'I Felt So Sick'

What could have been. Jamie Lynn Spears hilariously reflected on not wanting to audition for Twilight in 2007. Hall of […]

END_OF_DOCUMENT_TOKEN_TO_BE_REPLACED

END_OF_DOCUMENT_TOKEN_TO_BE_REPLACED
We and our partners use cookies on this site to improve our service, perform analytics, personalize advertising, measure advertising performance, and remember website preferences.Ok