17 Cases of Mumps Confirmed at Indiana University, with the Majority Linked to School Fraternity 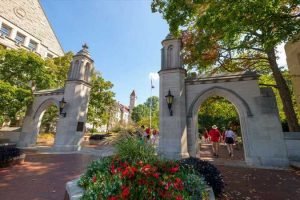 There is no scientific link between vaccines and autism, according to the Centers for Disease Control.

More than a dozen cases of mumps have been reported at Indiana University this year, and the majority have been linked to one of the school’s fraternities.

IU spokesman Chuck Carney tells PEOPLE that there have been 17 confirmed mumps cases on campus since February 12, nine of which have been linked to a single fraternity house.

While the school is not identifying the students or the fraternity, CNN reported that those affected by the outbreak were either members of the fraternity or had visited the house.

Carney went on to tell PEOPLE that every student enrolled at IU is required to have two doses of the MMR (measles, mumps and rubella) vaccine — the amount recommended by the CDC — with an exemption available for religious reasons.

On April 4, the Monroe County Health Department held a free MMR vaccination clinic at the fraternity house, which allowed members to get a third shot “which provides about a month of boosted immunity.” Out of the 149 members of the fraternity, 58 percent got a vaccine.

The school is also taking steps to promote healthy practices in general.

“We’re making the campus aware and advising students to say home if they feel sick and otherwise practice good hygiene habits — wash their hands with soap and water, don’t drink or eat after someone, cover a sneeze with a tissue, for example,” Carney tells PEOPLE. “We want all of our 41,000+ students to remain healthy, so they should go to the IU Health Center on the IU Bloomington campus and get checked out if they feel unwell or see their own doctor.”

According to the Mayo Clinic, mumps is “a viral infection that primarily affects saliva-producing (salivary) glands that are located near your ears.” Signs and symptoms of the virus typically develop between two to three weeks after exposure.

In addition to painful gland swelling, mumps can also cause fever, headache, muscle aches, fatigue and loss of appetite. However, in rare cases, the contagious disease has been known to cause brain and spinal cord damage as well as death, according to the CDC.

The virus is transmitted through saliva or mucus, and can be spread by sharing cups and utensils, or participating in close-contact activities, like sports or kissing, the CDC says.

Both mumps and measles can be prevented with the MMR vaccine, but measles cases are on the rise worldwide.

The World Health Organization said in a report released on Monday that based on preliminary data, measles cases are up by 300 percent worldwide in the first three months of 2019, compared to the same time period last year, adding that the new data “indicates a clear trend” of rising rates of infection.

Earlier this year, the organization named “vaccine hesitancy” — the “reluctance or refusal to vaccinate despite the availability” — as one of the biggest threats to global health in 2019. Thanks to the measles vaccine, 2 to 3 million deaths are prevented each year, WHO said, but that number could be much higher.

“A further 1.5 million could be avoided if global coverage of vaccinations improved,” the group said.

The CDC says that there are currently outbreaks of the measles in several parts of the U.S., including the Pacific Northwest, Michigan and New York City. They believe the outbreaks are due to people traveling to other countries with significant outbreaks, including Israel, the Philippines and Ukraine, and then coming back to the U.S. and infecting people in areas with low vaccination rates.

Though the measles was considered eradicated in the U.S. as of 2000 thanks to the vaccine, some people are choosing to not vaccinate, partially due to the spread of misinformation about the vaccine, which has led parents to opt out of giving children the life-saving protections.