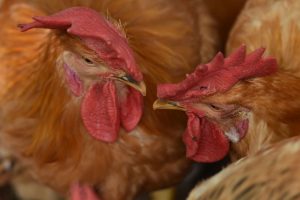 A 4-year-old boy in China has become the first human case of the H3N8 strain of bird flu, according to news reports.

The boy, who lives in Henan province, was exposed to chickens and crows at his home, which could have transmitted the virus, according to news reports. The boy was infected with an avian version of the H3N8 virus, though strains of this virus can also infect horses  (known as equine influenza virus) and dogs (known as canine influenza virus. And now it has made the leap to humans, though the risk of it spreading from human to human is low, according to a Reuters report.

Though avian flu viruses originated in birds and don’t easily spread to other animals, in rare cases, strains have adapted to infect other animals — such as dogs and horses — as well as humans, Live Science previously reported. Bird flu strains that have hopped to humans include: H5N1, H7N9, H5N6, H5N8 and now H3N8.

A genetic analysis of the Henan province case suggests the variant came about through a shuffling of genes from more than one avian flu virus, making it a reassortant. This type of mixed-up virus “can have unpredictable capacity in terms of transmission and virulence in human population,” said Marius Gilbert, an epidemiologist at the Université Libre de Bruxelles in Belgium, as reported by The Guardian. This particular case of H3N8 holds genes from viruses previously found in poultry and wild birds, Reuters reported.

The fact that this variety of H3N8 has hopped to a human does not mean it can spread easily between humans, experts say. “We often see a virus spread to a human and then not spread any further so a single case is not a cause of great concern,” said Sir Peter Horby, professor of emerging infectious diseases and global health at the University of Oxford, The Guardian reported.

In June of last year, China also reported the first human case of another bird flu, called H10N3, Live Science reported at the time. The 41-year-old man in the city of Zhenjiang was hospitalized but ultimately discharged.

Because avian influenza has the potential to trigger outbreaks in humans, health organizations closely monitor new variants. In 2016 and 2017, for instance, an outbreak of H7N9 in China led to the deaths of more than 300 people, according to Science Magazine. And the H2N2 strain of bird flu caused a pandemic in 1957 after it swapped genes with human flu viruses; the death toll from it reached 1.1 million worldwide, including 116,000 deaths in the United States, the CDC reported. The virus behind the 1918 pandemic, called H1N1, likely also came from birds, Live Science reported.

In February of 2021, Russia reported the first case of avian influenza strain H5N8 passing from poultry to humans, Live Science reported. Though there was no evidence of human-to-human spread, seven poultry plant workers were infected with the strain.

There is no information about the health status of the young boy infected with the H3N8 strain of bird flu.

Jeanna is the editor-in-chief of Live Science. Previously, she was an assistant editor at Scholastic’s Science World magazine. Jeanna has an English degree from Salisbury University, a master’s degree in biogeochemistry and environmental sciences from the University of Maryland, and a graduate science journalism degree from New York University. She has worked as a biologist in Florida, where she monitored wetlands and did field surveys for endangered species. She also received an ocean sciences journalism fellowship from Woods Hole Oceanographic Institution.