7 healthy habits that can almost HALVE your risk of dementia 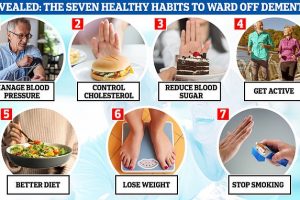 From stubbing out cigarettes forever to eating more nuts: The seven simple habits that can almost HALVE your risk of dementia (even if you’re genetically predisposed to the condition!)

Adhering to seven healthy habits can almost halve your risk of dementia, even in people who have genetic predisposition to the condition, a study has found.

Keeping active, eating better, exercise, not smoking and keeping cholesterol and blood sugar in check lowers the risk of getting dementia by up to 43 per cent.

Known as the ‘American Heart Association’s Life’s Simple 7’ these habits had been linked to a lower risk of dementia previously.

But now study author, Adrienne Tin of the University of Mississippi, said the new study, which followed almost 12,000 people for 30 years, showed the habits could also help ward off dementia for those with the highest genetic risk of dementia.

‘The good news is that even for people who are at the highest genetic risk, living by this same healthier lifestyle are likely to have a lower risk of dementia,’ she said. 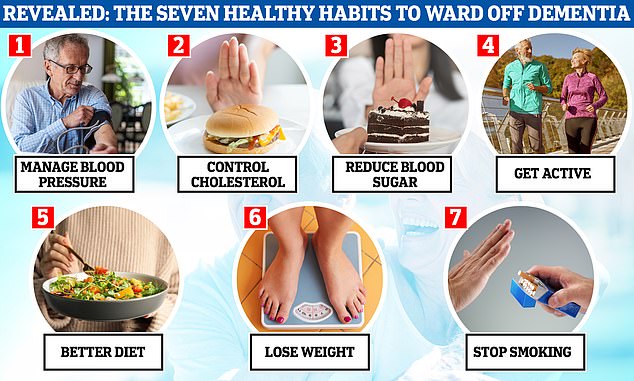 Seven habits are linked to a lower risk of dementia in those with genetic risk, a study suggests

The American Heart Association has defined seven ways people can improve and maintain their cardiovascular health.

Use nicotine replacement products or switch to vaping

Also do at least two days of muscle strengthening  a week.

Having too much of a fatty substance called cholesterol in your blood can block your blood vessels. It can be reduced by a good diet and exercise.

Regular high blood sugar levels can damage the eyes, nerves, kidneys and blood vessels over time. Good diet and exercise can help keep it in check.

High blood pressure puts your heart, blood vessels, and other organs under extra strain and can contribute to vascular dementia. It can be managed by diet and exercise.

The study looked at 8,823 people with European ancestry and 2,738 people with African ancestry who were aged about 54-years-old at the start of the study, then followed for three decades

Researchers calculated the genetic risk scores at the start of the study, and then scored them for how closely they adhered to the seven healthy habits.

They found the group with the highest genetic risk included those that had at least one copy of a gene variant – change in DNA – associated with Alzheimer’s disease.

Of those with a European background, 27.9 per cent had the gene, while of those who had African ancestry, 40.4 per cent had it.

For people with a European background, researchers found that those with the highest scores in the lifestyle factors had a lower risk of dementia, even among the group with the highest genetic risk.

For each one-point increase in the lifestyle factor score, there was a 9 per cent lower risk of developing dementia, the study found.

The study found that in those with European ancestry, people who scored intermediate and high on lifestyle factors were linked to a 30 per cent and 43 per cent lower risk for dementia, respectively.

Among those with African ancestry, the intermediate and high categories were associated with 6 per cent and 17 per cent lower risk for dementia, respectively.

‘Some, like our age and genetic make-up, we cannot change, while others, like diet and exercise, we can.

‘This study supports the idea that what is good for the heart is also good for the brain – and that this holds true even for people with a higher genetic risk of dementia, at least for participants of European ancestry.

However, she added there were some limitations to the findings.

‘Although the researchers monitored participants for all forms of dementia, when grouping people according to genetic risk they focused only on genes that increase risk of Alzheimer’s disease, just one cause of dementia,’ she said.

‘Also, health scores were taken at the start of the study, but what we don’t know is whether the participants’ healthy habits lasted for the duration of the study.’

Dr Sancho added that future research will need to include risk genres for all forms of dementia, and ideally continually monitor health habits.

The research is published in the journal Neurology.

The Alzheimer’s Society reports there are more than 900,000 people living with dementia in the UK today. This is projected to rise to 1.6 million by 2040.

In the US, it’s estimated there are 5.5 million Alzheimer’s sufferers. A similar percentage rise is expected in the coming years.

Dementia itself is an umbrella term used to describe a range of progressive neurological disorders (those affecting the brain) which impact memory, thinking and behaviour.

There are many different types of dementia, of which Alzheimer’s disease is the most common, with vascular dementia another type.

There is currently no cure for dementia but drugs are available which can slow its progression.