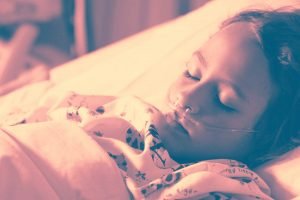 Though flu season is coming to a close, it isn’t over just yet. The story of a 2-year-old Illinois girl who’s fighting for her life is a reminder of that. Layla Thomas has been in the pediatric ICU for over a week battling a rare complication of the flu, and doctors have given her a 50/50 chance of survival.

At first, Thomas’ symptoms were mild. “She had just a runny nose, maybe a little cough, but nothing out of the ordinary that we hadn’t seen before,” the girl’s aunt, Jessica Kile, told local news station KMO. Then, her condition took a turn for the worse.

Thomas was reportedly rushed to a local hospital with a 107-degree fever and then quickly transferred to St. Louis Children’s Hospital in Missouri, according to the Belleville News-Democrat. Doctors diagnosed her with necrotic encephalitis, a rare brain disease that can result from complications of viral infections like the flu, according to the National Institutes of Health (NIH).

Necrotic encephalitis can cause tissue in the brain to swell, bleed, and eventually die. The NIH states that patients who have the condition will start to develop neurological symptoms, like seizures and hallucinations, and then often go into a coma. Doctors decided to put the toddler in a medically induced coma before she hit that point, according to a GoFundMe page set up for Thomas. The page also says that Thomas’ doctors haven’t seen a case like this in over 10 years.

Thomas’ family is hanging on to hope that she’ll recover, and they’re sharing her story to alert other parents to the severity of the flu, even if the symptoms are mild at first.

The Centers for Disease Control and Prevention (CDC) recommends that everyone 6 months and older get the flu shot annually. Flu season peaks from December to February, but it can last until May. To be protected before the season starts, the CDC says to get vaccinated by the end of October each year.

Kline told the Belleville News-Democrat that Thomas was vaccinated this year. However, the flu shot doesn’t offer 100% protection, which is why it’s important to recognize early flu signs before any complications begin to set in. Symptoms include fever, aching muscles, chills, sweats, headache, cough, fatigue, weakness, congestion, and sore throat. If you or a loved one experiences any of these symptoms, get to a doctor as soon as possible. Early treatment can help reduce the risk of potentially deadly complications.

To help Thomas’ family, you can donate via their GoFundMe page here.