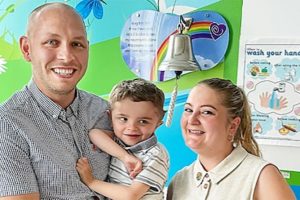 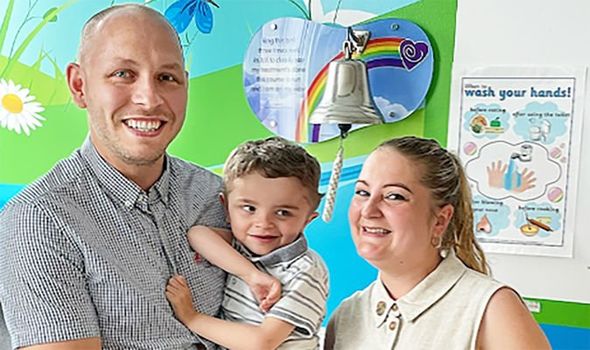 Oliver Swift was given a two percent chance of survival when the tumour was found when he was five months old.

At one point his parents were told to say their goodbyes to him when he failed to wake up after surgery.

But now, following another operation and chemotherapy, just two percent of the tumour is left – and it’s not cancerous.

Oliver’s mum Charlene, 32, said: “It really is a miracle. We were all told to come and say goodbye to him and we had him christened in his hospital bed.

“He was on a life support machine and the doctors couldn’t wake him up. He kept having seizure after seizure.

“But they gave it one last try, and suddenly he started breathing on his own.” The family’s ordeal began when Oliver, now four, was diagnosed with a Glioma brain tumour in February 2018.

A scan showed it was taking over the left side of his brain, pushing it to one side.

Charlene, who lives in Nottingham with husband Ashley, 32, said: “Because of the size of it, doctors said it possibly began in the womb before he was born.

“We were devastated. Our baby was only five months old, and doctors didn’t think he was going to live.

“After a biopsy he started to bleed and had to be rushed into intensive care, but luckily they were able to stem the bleeding.’

Four weeks later Oliver had part of the tumour removed at Queen’s Medical Centre in Nottingham. Charlene said: “That’s when they didn’t think he was going to make it, and told the family to come and say goodbye. They had tried several times to take him off the life support machine, but he kept having seizures.

“Then one doctor said to try bringing him off the oxygen and it worked.

“He started breathing on his own, and was able to wake up and come off life support.’

Oliver then began two and a half years of chemotherapy treatment and further surgery to remove more of the tumour.

Charlene said: “The treatment has been very aggressive, and its taken a lot out of him. But we knew that it was his only chance.”

It finally finished in June this year and doctors had amazing news for the family. A scan showed there was only two percent of the tumour remaining, and it is no longer cancerous.

His parents, who have raised money for an MRI brain scanner at the hospital to help other children, couldn’t believe the news.

Charlene said: “We couldn’t take it in, it was such amazing news. He’s done so well, and defied all their predictions to even survive, let alone be cancer free now.

“He rang the end-of-treatment bell at the hospital in July, and that was very special for us. We never thought we would see that moment.”