A Terrifying Doctor's Visit Pushed This Man to Drop 177 Pounds 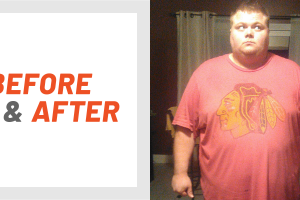 My childhood wasn’t an easy one. I was a ward of the state of Illinois until I was adopted at the age of 11; before that, I lived everywhere from foster homes to an abandoned trailer. Some days, my only meals were bowls of rice. Even after my adoptive mom, Betsy, took me in, things were tough. I felt uncomfortable in public school, and I pretended to be too sick to go to class. Sometimes I even hid under my desk. I didn’t know how to cope with the new environment.

In 2008, when I was 19, I began attending military school, and in some ways, I began to thrive. My grades picked up, and I made Sergeant; even my supervisors were impressed with my progress. But I felt alone and my depression was growing worse. Despite the weekly workouts, I kept gaining weight. There were many healthy food options available, but for some reason, I was drawn to Southern comfort foods.

Now, the extra pounds were straining my joints and back—I was in constant misery every day. I dropped out in 2009, partly to try to save a long-distance relationship with my then-girlfriend. It didn’t work, though; after the break-up, I turned to food again. I think I put on nearly 100 pounds that year alone.

Doctors told me I was killing myself

In 2016, at age 27, I was living on my own, working 12 hours a day, 6 days a week, at a box factory. I ate fast food nearly every day: mainly Whoppers from Burger King and chicken BBQ pizza from a local pizzeria. I didn’t have time to cook, and I found comfort in fatty, salty food. I knew my eating habits were unhealthy, I just didn’t care. My depression was so bad I just wanted to shut out the world.

Right before my 28th birthday, I felt so dizzy and dehydrated that I drove myself to the hospital. I was admitted with high blood sugar, and eventually diagnosed with type 2 diabetes. I was so dehydrated that the doctors kept me overnight. They told me I was ‘killing myself’—and that if I didn’t change my eating habits, I would be dead by the time I was 35 years old. On some deep level, I think I knew I was killing myself, and that I truly didn’t want to do that.

Losing the weight: From surgery, to dieting, to exercise

After about a year of yo-yo dieting—everything from Weight Watchers to Jenny Craig to counting calories—my mom suggested that I try gastric sleeve surgery. My doctor agreed, and we scheduled the operation for July 17, 2017. In the meantime, I went on a liquid diet that mainly consisted of protein shakes. It wasn’t pretty—it was very difficult to get used to—but I lost 50 pounds even before I went under the knife. Afterward, I ate well and exercised, and within four months, I lost 140 pounds.

These days, I try to eat high-protein meals and snacks: I cook breakfast every morning (usually two eggs and a piece of cheese), and for lunch and dinner, I’ll have chicken or bison meat, which is super lean. I always liked vegetables, but didn’t eat them very often. Now, I have them as a side at lunch and dinner—usually broccoli, spinach or cauliflower. I also go to the gym every day. For a while, I worked with a personal trainer, but now, I work out with my girlfriend. I do a three-day split with free weights: lots of goblet squats and lunges..

It felt great to lose the weight. I don’t know how, but afterward, the haze I used to feel when I tried to think lifted, and I started thinking more clearly. I feel like a world has lifted off my shoulders. I have more energy now than I had since 7th grade.

I’m going back to school, too, and am currently studying to take the POWER test (the Peace Officer Wellness Evaluation Report), which is given to people before entering the police academy. My goal is to be a policeman one day. I’ve faced a lot of obstacles in my life; maybe one day, I can help other people, too.