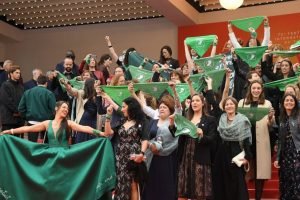 Ahead of Saturday’s premiere of an Argentine documentary on abortion, dozens of women demonstrated for abortion rights on the red carpet at the Cannes Film Festival in France.

Women, including the filmmakers and activists seen in the film, waved green handkerchiefs and carried a large banner while walking the Cannes carpet at the premiere of Argentine director Juan Solanas’ “Let It Be Law.” The documentary depicts Argentina’s battle to legalize abortion.

Argentina’s Senate last year rejected a bill to legalize abortion, prompting protests in Buenos Aires streets. Green handkerchiefs have come to be symbol of the movement. A modified version of the bill is to be presented to Congress on May 28.

The film’s debut comes as abortion rights are also being fiercely contested in the U.S. On Tuesday, the Alabama Senate passed a bill that would outlaw almost all abortions in the state, including those involving pregnancies from rape or incest.

Many in the movie industry in Cannes have followed the developments in the U.S. with concern.

“What’s happening in Alabama is so important in the world,” Eva Longoria, who produced the Netflix documentary “Reversing Roe,” said Friday at a “Women in Motion” event in Cannes. “It’s going to affect everybody if we don’t pay attention.”