Agnetha Fältskog health: ‘We struggle on’ – ABBA star on the band’s ‘ailments’ 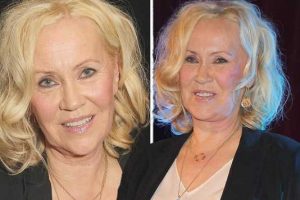 In the throwback interview, Fältskog suggested that their upcoming four-year residency in a custom built London arena and accompanying album Voyage could be the last time fans hear the band together, since their original split back in 1982. Even though the tour, which is set to start on May 27, 2022 at Queen Elizabeth Olympic Park has the potential to run for a lengthy period of time, the original ABBA members will not be seen in person, instead so-called “Abbatars”, which look like the group did in the 1970s, will take their place to create an “immersive digital concert experience”. When asked when the four of them will appear together in person, Fältskog said: “I don’t really dare to say.”

Talking on Swedish radio at the time, she continued: “We’re a bit older now and have our minor ailments. We struggle on. But I don’t dare say, because it’s a bit uncertain.

“At the moment we feel happy that we got this together and let’s hope everything goes well in London at the premiere over there.”

Not divulging more detail about the band’s health troubles, Fältskog went on to say exactly how the quartet created the virtual show, she said: “None of us probably knew what to expect, but we’ve worked with it a lot, so you grow into it eventually. We stand there doing these songs with… I don’t know how many cameras and people.

“It felt great to do it in the end because it was so different.

“Also there was a vibe, one felt that maybe it’s the last thing we do. Same thing with the album.”

With hints that the project may be the last that they ever do, the star’s have said that they remain friends. Despite some turbulence in the past, they “get on very well” and have “really liked hanging out”.

The band’s reunion comes after Fältskog walked away from the public eye back in 1982, shortly after the band disbanded. As a self-confessed “recluse” the star admitted that she felt like the “black sheep” of the band, as at the height of their fame, she was cursed with a fear of flying and the guilt she felt leaving her young children.

In a 2013 interview, she said: “Maybe I was a recluse for some years. I was so tired once Abba was over and just wanted to be calm and with my children.

“I married, was in Abba, had my children, divorced, all in 10 years. I wonder how I managed it, but I was young.”

After the band separated, nothing was heard about Fältskog, creating a media frenzy which speculated about why she had disappeared.

“I was the black sheep of Abba,” the singer continued to say. “The others were more social. I didn’t like to go out or party. But it wasn’t as dramatic a story as was painted. I was not in hiding, but I did go away and hide from that life because I needed it.

“I was very tired after the whole Abba period. I needed a break from it as it had been so consuming. There were a couple of years when I did not listen to Abba music at all – I simply couldn’t.”

As well as feeling physically drained, Fältskog developed a crippling phobia of flying while the band were touring in the USA back in 1979. It was during one incident where their plane had to make an emergency landing after being struck by a tornado that Fältskog’s fear originated.

“It stopped me flying,” she recalled. “I try not think of it, as it was terrifying. The pilot failed to land at the first attempt but then we landed at the second try.

“I already had a fear, but this event was the turning point. There have been so many years I did not fly and Björn and Benny and Frida travelled more. There were photos of the three without me and I was called the recluse.

“I had to have therapy for my fear, it’s getting better but it takes a long time. I can fly now for two or three hours, but no more. It was bad before, so that terrible flight didn’t make it better. It was a terrible thing to go through and I try not to think about it.”

The NHS explains that phobias can become extremely debilitating and can occur in relation with an object, place, situation, feeling or animal. They typically develop when a person has an exaggerated or unrealistic sense of danger about a specific trigger.

If a phobia becomes very severe, a person may organise their life around avoiding the thing that’s causing them anxiety. As well as restricting their day-to-day life, it can also cause a lot of distress. Due to this, phobias are categorised as a type of anxiety disorder.

Potential symptoms that may occur when an individual comes into contact with the source of the phobia includes:

Specific or simple phobias centre around a particular object, animal, situation or activity. Whereas complex phobias tend to be more disabling. They usually develop during adulthood and are often associated with a deep-rooted fear or anxiety about a particular situation or circumstance. Due to the different nature of the two types of phobia, treatment methods may also differ.

Simple phobias can be treated through gradual exposure to the object, animal, place or situation that causes fear and anxiety. This is known as desensitisation or self-exposure therapy. Treating complex phobias often takes longer and involves talking therapies, such as: