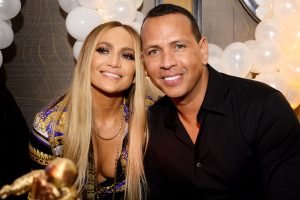 Alex Rodriguez has already earned a reputation as the greatest Instagram boyfriend of all time, what with his penchant for snapping photos of girlfriend Jennifer Lopez as she walks the red carpet.

But on Monday, the former baseball star, 43, took his skills to the next level, filming video of Lopez as she rehearsed a pole-dancing scene for her upcoming movie, Hustlers.

Lopez plays a stripper who bands together with her fellow employees, including a character played by Constance Wu, to turn the tables on their clients.

For rehearsal, Lopez wore clear stiletto heels, a black sports bra and matching booty shorts. She watched herself in the mirror as she spun around on the pole and struck a pose.

Since Lopez, 49, was doing some dirty dancing in the practice, Rodriguez played “(I’ve Had) The Time of My Life” — a track from the soundtrack to 1987’s Dirty Dancing — while he filmed it for his Instagram story.

During a visit to Jimmy Kimmel Live! earlier this month, Lopez said she’s training for the film with an instructor from Cirque du Soleil.

“We do have a pole at the house right now,” she said. “It’s a portable pole so you can practice… You can practice with it there. I have a girl who comes in and teaches me.”

“It’s very hard!” Lopez added. “I have bruises everywhere. It’s so hard. I have a lot of respect for people who do the pole. It’s much more difficult than [professional dancing]. It’s, like, acrobatic. It’s different muscle groups and the things they do with their legs, upside down, I’m like, ‘What? I can’t… hold on. Can we do that part again?’ It’s hard!”

It wasn’t her only workout this week in preparation for Hustlers.

On her own Instagram story, Lopez shared videos of herself lifting weights in the gym.

“Working on strength training for new movie,” she wrote on one shot.

Along with her special workouts, Lopez has also been prepping for the role with a 10-day, no-sugar, no-carb diet suggested by her trainer Dodd Romero.

“He said, ‘You know what, let’s do something, let’s take it [up a notch],’ ” Lopez recalled on Ellen with Ellen DeGeneres. “Because I’ve been working out, I work out a lot, I try to stay healthy. And he’s like, ‘Let’s do something to move the needle a little bit.’ “

She said cutting out sugar was a shock to her system.

“Not only do you get a headache, but you feel like you’re in an alternate reality or universe,” she said. “Like you don’t feel like yourself. You realize that you’re addicted to sugar.”

Lopez said that the first few days were tough, but by the end she felt so good that she’s ready to do it again.

“What happens is, it takes down the inflammation a little bit,” she said. “So all of a sudden you start feeling really small, and less swollen, and it feels good. You get addicted to that feeling too.”

As for Rodriguez, he and Lopez are going strong, two years into their relationship.

She gushed over her life with A-Rod, saying the two — who each have two children from previous marriages — are thrilled that their kids get along so well.

“We love each other and we love our life together,” she told PEOPLE in December. “The exciting part of our love is that we’re both very aware of how lucky we are to have found each other.”