Alex Rodriguez Lost Over 6 Lbs. in 2 Days to Not 'Look Fat' at Met Gala with Fiancée J. Lo 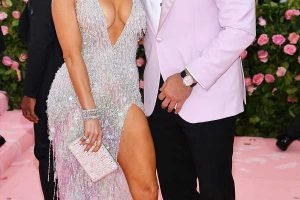 The 14-time All-Star, 43, documented his most recent weight loss, where he dropped six pounds in order to fit into his size 44 Versace tuxedo, four sizes smaller than his usual size 48.

A-Rod was in a weight-loss mode for fashion’s biggest night, and broke down his methods in a recent Youtube vlog. The former shortstop and third basemen credited yoga, strategic sweating and stair-running as key parts of his weight-loss routine. “I used to exercise for big games against the Red Sox, now I exercise not to look fat at the Met Ball,” he joked.

“You see this goofy suit that I’m wearing? It’s to sweat, sweat baby sweat,” Rodriguez said in the vlog. “I have this crazy pink tuxedo that Jennifer [Lopez] and Versace are making me wear and I need to lose exactly six-and-a-half pounds. I’m taking two yoga classes and running the stairs for an hour. And I haven’t eaten in 24 hours.”

Rodriguez even revealed he goes on a liquid diet consisting solely of water to shed those extra pounds! “I’m going to have to hold my stomach in all night,” he said. “Now I haven’t had steak in four days that gets me very angry.”

While A-Rod and fiancé Jennifer wowed at the Met Gala crowd in style, it came at the price of not eating actual food and forcing his body to sweat out water weight.

The father of two revealed he lost a total 6.5 pounds in two days, and received praise for it in the comments section of his Youtube vlog, where commenters applauded his weight-loss efforts.

Rodriguez also admitted that he was looking forward to the hour after the Met Gala when he would eat pizza at his favorite local spot. “I cannot wait to eat an entire pizza,” he told fans in his video.