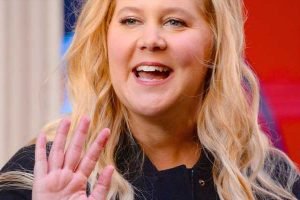 After what seemed like one heck of a pregnancy journey, packed with challenges that caused her to cancel part of her comedy tour and a wicked case of extreme nausea known as hyperemesis gravidarum, Amy Schumer finally gave birth on May 5. But that doesn’t mean the new mum is done giving fans a hilariously real look into her life.

Quite the opposite, actually.

In the photo, the comedian is attached to a number of wires and an IV, which link her to a pole just inches away. And Amy’s face really says it all: staring at the camera with a cranky frown that’s begging for you to keep your distance. After all, she did just give birth and, ummm friendly reminder, girlfriend’s on the toilet. Guess privacy really goes out the door the minute you become a mumma.

But plenty of amazing positives also come along with this new mum status—evidenced by an earlier Instagram post in which Amy’s holding little Gene close to her chest and in the caption praises all of the women, err “f#cking warriors,” who have gone through childbirth themselves and/or have supported her throughout this experience.

Ok here’s my post baby annoying post and my takeaway from pregnancy. Women are the shit. Men are cool and whatever but women are fucking warriors and capable of anything. I was lucky enough to get to have a doula. Her name @domino_kirke @carriagehousebirth what do doulas do? I don’t totally know But what she did was make me and Chris feel totally secure and supported throughout my pregnancy and the birth process. I really recommend getting one if you can. Doctor Brill and all the nurses and pediatricians at Lenox Hill and all the other hospitals i spent time in this year, thank you for everything. I did Pilates with strong women and went for walks. I threw up violently and felt sick mostly every day of my pregnancy. Hyperemesis is real and it’s awful. But fuck, what they say is true. The second you give birth it’s gone. @hgmoms has the best research I found on the condition The only thing that helped me with my nausea was products from @thelordjones I learned that globally 1 in 5 births take place without the assistance of a skilled birth attendant. @everymomcounts is a great place to donate $250 equips a midwife with a bag of medical equipment needed to provide care to hundreds of women and babies in Guatemala. All my friends. Friends I’ve had for 30 years or people who encouraged me to “keep going” or telling me “it will be worth it”. Thank you. Every woman I encountered is so willing to help and advise you and I felt all their strength. And you were right. Thank you ladies from my family. Chris, Gene and of course Tatiana #titsleaking #wearingadiaper

Here for this real AF content and hoping life with baby Gene just keeps it comin’.

END_OF_DOCUMENT_TOKEN_TO_BE_REPLACED

END_OF_DOCUMENT_TOKEN_TO_BE_REPLACED
We and our partners use cookies on this site to improve our service, perform analytics, personalize advertising, measure advertising performance, and remember website preferences.Ok