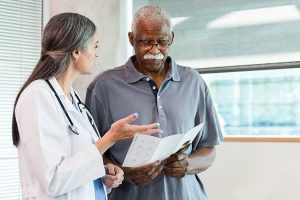 The data come from a review of 45,834 veterans (aged 55–69 years) who had been diagnosed with prostate cancer. About one third of these men self-identified as non-Hispanic Black, and the rest were White.

The review found that annual prostate-specific antigen (PSA) screening significantly reduced the risk of dying from prostate cancer among Black men but not White men.

The study was published online on August 4 in JAMA Oncology.

“These results may be biologically plausible because a shorter screening interval may be valuable for detecting aggressive disease, which is more common in Black men,” say investigators, led by University of California, San Diego, radiation oncology resident Michael Sherer, MD.

“Given that Black men are younger at diagnosis and have worse prostate cancer survival compared with White men,” more intensive screening recommendations “may benefit Black patients,” they write.

Annual screening may well have “a greater potential to benefit” Black men, he said. “While we would ideally see randomized data supporting this, those data are unlikely to ever be forthcoming. Thus, this study provides a strong rationale to support the recommendations from many guideline panels (including those from the American Urological Association) that Black men, in the context of shared-decision making, may benefit more from PSA based prostate cancer screening than the population at large,” he added.

Overall, the findings could help inform screening discussions with Black men, the investigators comments. In its most recent guidance, the US Preventive Services Task Force recommends shared decision-making regarding PSA screening for men aged 55–69 years.

They then correlated screening behaviors with the subsequent risk of dying from prostate cancer.

However, on multivariable regression, annual screening, in comparison with some screening, was associated with a significant reduction in the risk of dying from prostate cancer only among Black men (sHR, 0.65; P = .02), not among White men (sHR, 0.91; P = .35).

The cumulative incidence of PCSM among Black men was 4.7% with annual screening but 7.3% with only some screening.

Screening frequency was similar between Black men and White men. Black men were younger on average (61.8 vs 63.1 years) and had slightly higher PSA levels at diagnosis but were not more likely to have regional or metastatic disease.

No funding was reported for this study. The investigators have disclosed no relevant financial relationshps. Wallis has received personal fees from Janssen Canada.

M. Alexander Otto is a physician assistant with a master’s degree in medical science. He is an award-winning medical journalist who worked for several major news outlets before joining Medscape and is an MIT Knight Science Journalism fellow. Email: [email protected]