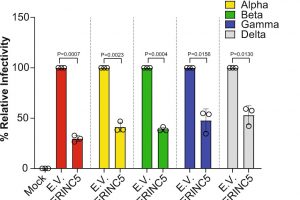 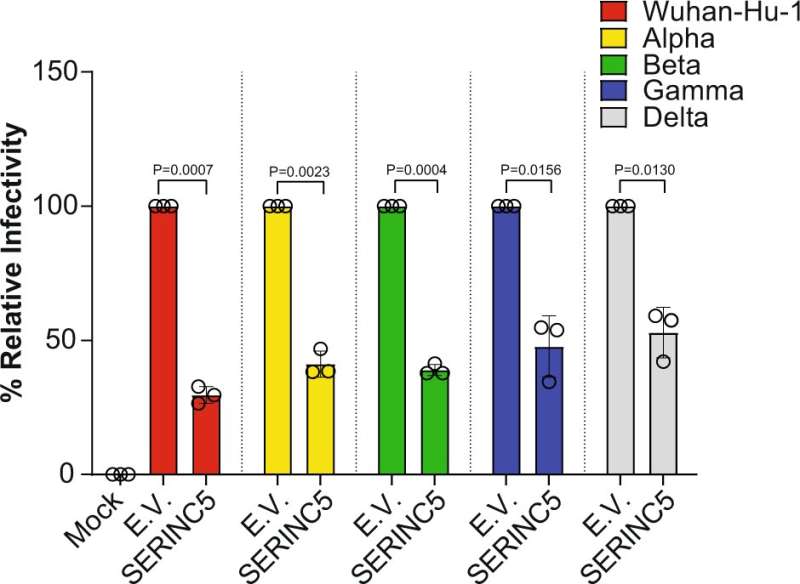 New research from the University at Buffalo reveals valuable information about the ways that host cells work to block entry of SARS-CoV-2 and, in turn, how the virus strikes back.

The findings uncover important features about cellular interactions between virus and host and how they might be exploited to develop new methods of treatment for both SARS-CoV-2, the virus that causes COVID-19, and HIV.

The research was reported by virologists at the Jacobs School of Medicine and Biomedical Sciences at UB and published today in Nature Communications.

“We are interested in understanding how host cells mount a defense against an invading viral pathogen,” said Spyridon Stavrou, Ph.D., assistant professor of microbiology and immunology in the Jacobs School and corresponding author on the paper.

The team focused on the host gene called Serine Incorporator 5 (SERINC5), which is potently antiviral toward HIV-1, the most prevalent form of the virus. They found that this gene also exhibits potent antiviral activity against SARS-CoV-2 and interestingly, it utilizes the same mechanism to block both SARS-CoV-2 and HIV.

“We were stunned that SERINC5 also blocks SARS-CoV-2, as this factor was primarily known to restrict retroviruses,” said Uddhav Timilsina, Ph.D., a postdoctoral researcher in the Stavrou lab and the first author of this study.

“The most surprising thing we observed is that SERINC5 uses a conserved mechanism to restrict both HIV-1 and SARS-CoV-2, viruses that are quite different and are responsible for current pandemics,” said Stavrou. “This shows a bona fide host-pathogen struggle and emphasizes the importance of SERINC5 as an antiviral gene.”

The UB researchers were also amazed by what they discovered about how the virus responds to SERINC5.

They report that this accessory protein expressed to fight SERINC5 works by blocking SERINC5 from getting incorporated inside the complete viral particles as they get produced and released from the infected cells.

The findings are beneficial for further studies on the biology of SARS-CoV-2 as the role of accessory proteins in the virus has not been well understood.

“Furthermore, the fact that SERINC5 acts on two very different viruses utilizing the same mechanism allows for targeting SERINC5 in the future for the development of therapeutics that may be good not just for SARS-CoV-2 but potentially for HIV-1,” he said.

He added that the research demonstrates that antiviral mechanisms used by host genes are highly conserved, as many times host factors utilize the same mechanism to counteract very different viruses.

“It will be interesting to learn if the antiviral effect of SERINC5 extends to other viruses,” said Timilsina.