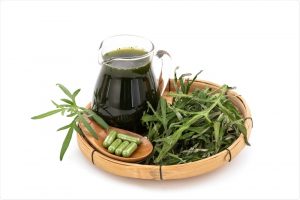 The severe acute respiratory syndrome coronavirus 2 (SARS-CoV-2), which is the virus responsible for the coronavirus disease 2019 (COVID-19), was originally detected in Wuhan, China in December 2019. Since then, SARS-CoV-2 has continued to spread silently, extensively, and rapidly around the world. Despite many efforts to find safe and effective specific therapies and preventive drugs that can combat SARS-CoV-2, few have been identified.

A new study published on the preprint server bioRxiv* describes the beneficial effect of an extract of Artemisia annua when used to treat cells in culture exposed to SARS-CoV-2. 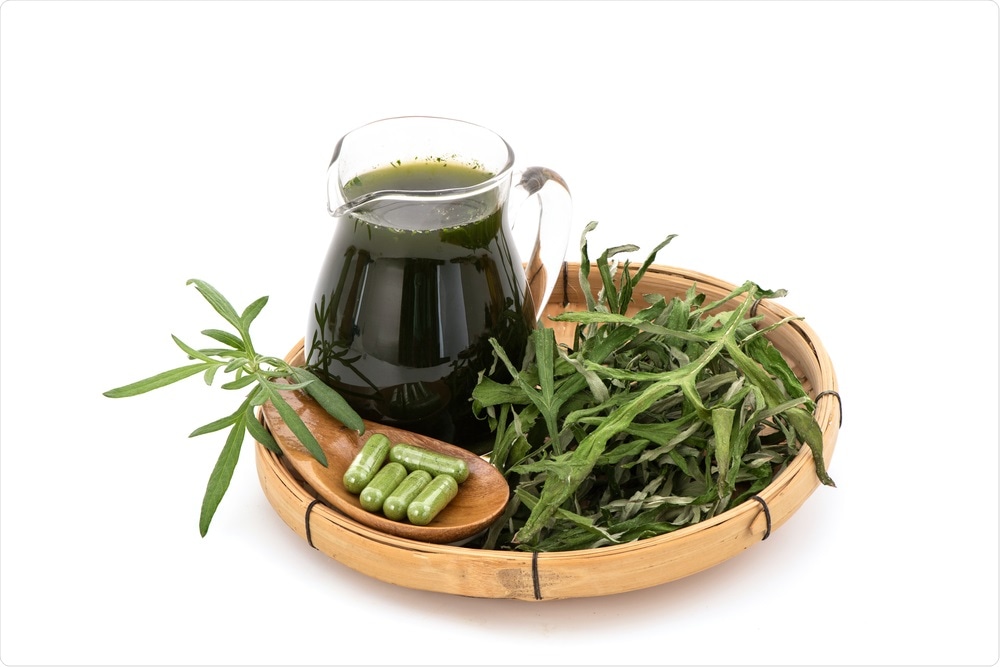 As of September 13, 2021, over 225 million people have been infected by SARS-CoV-2 globally, of which over 4.6 million have succumbed to COVID-19. Equally devastating has been the economic shutdown triggered by the constant threat of SARS-CoV-2 transmission.

Early on in the COVID-19 pandemic, researchers decided the only reliable way to end this pandemic would be to develop and deploy a safe and highly effective vaccine against SARS-CoV-2. Within a year, several pharmaceutical companies rolled out the first two vaccines, both of which were based on a messenger ribonucleic acid (mRNA) platform that uses this genetic information molecule to allow the recipient’s cells into producing the viral spike antigen. A neutralizing antibody response is then initiated that will prevent future infections from causing serious health effects on the vaccinated individual.

The emergence of multiple variants of concern (VOCs) of SARS-CoV-2, with higher infectiousness and/or resistance to neutralizing antibodies elicited by the wildtype SARS-CoV-2 strain, has challenged this expectation. As it became clear that the Delta variant, which is the current dominating strain around the world, could potentially fuel a surge of COVID-19 cases, therapeutics began to be urgently sought to treat both unvaccinated patients and vaccinated patients experiencing a breakthrough infection.

The current study evaluates the efficacy of seven cultivars of the medicinal plant Artemisia annua in preventing SARS-CoV-2 VOC replication in vitro.

A. annua has been used throughout history to treat malaria symptoms. In the scenario of the rapid spread of the Delta variant, with a reproductive number of 5-7, the researchers explored the ability of this plant to prevent viral replication in vitro.

A recent study conducted by the authors of the current study found that A. annua extracts had specific activity against SARS-CoV-2. To this end, the authors demonstrated that viral replication in vitro could be hindered by using the dried leaves of seven cultivars of this plant, from four continents.

The efficacy of inhibition was negatively associated to the artemisinin (ART) content in that study. This agrees with other research indicating that another perennial Artemisia species, A. afra, which does not contain ART, was as effective as the other in inhibiting viral replication.

The half-maximal inhibitory concentration (IC50) of the two plant species were 0.9-3.4 and 0.65 mg/mL, respectively, showing that ART is not related to antiviral activity. Despite these encouraging results, the retention of neutralizing efficacy against the newer VOCs has not been established.

The researchers of the current study used herbal tea prepared by infusing hot water with the dried leaves of four A. annua cultivars. These teas were then used to pre-treat cultured VeroE6 cells that were challenged by SARS-CoV-2 after an hour. Another set of cells were treated after being challenged with the viral VOCs.

The scientists found that teas of A. annua prevented the replication of the SARS-CoV-2 VOCs. Ethanolic extracts were far more potent in their inhibition as compared to the hot water extracts.

The inverse association between the level of ART and antiviral efficacy underlines the need to characterize this extract. For instance, it contains quercetin and myricetin, both of which are known to be inhibitory to SARS-CoV-2.

Of course, another important aspect relates to the ability of non-ART species of A. annua to fight the infection by SARS-CoV-2. The extract must also be safe and thus not harm the host cell itself. To this end, the safety of A. annua was demonstrated by the lack of cytotoxicity detected when the dry weight of the dried leaves was 50 μg or less for all cultivars. 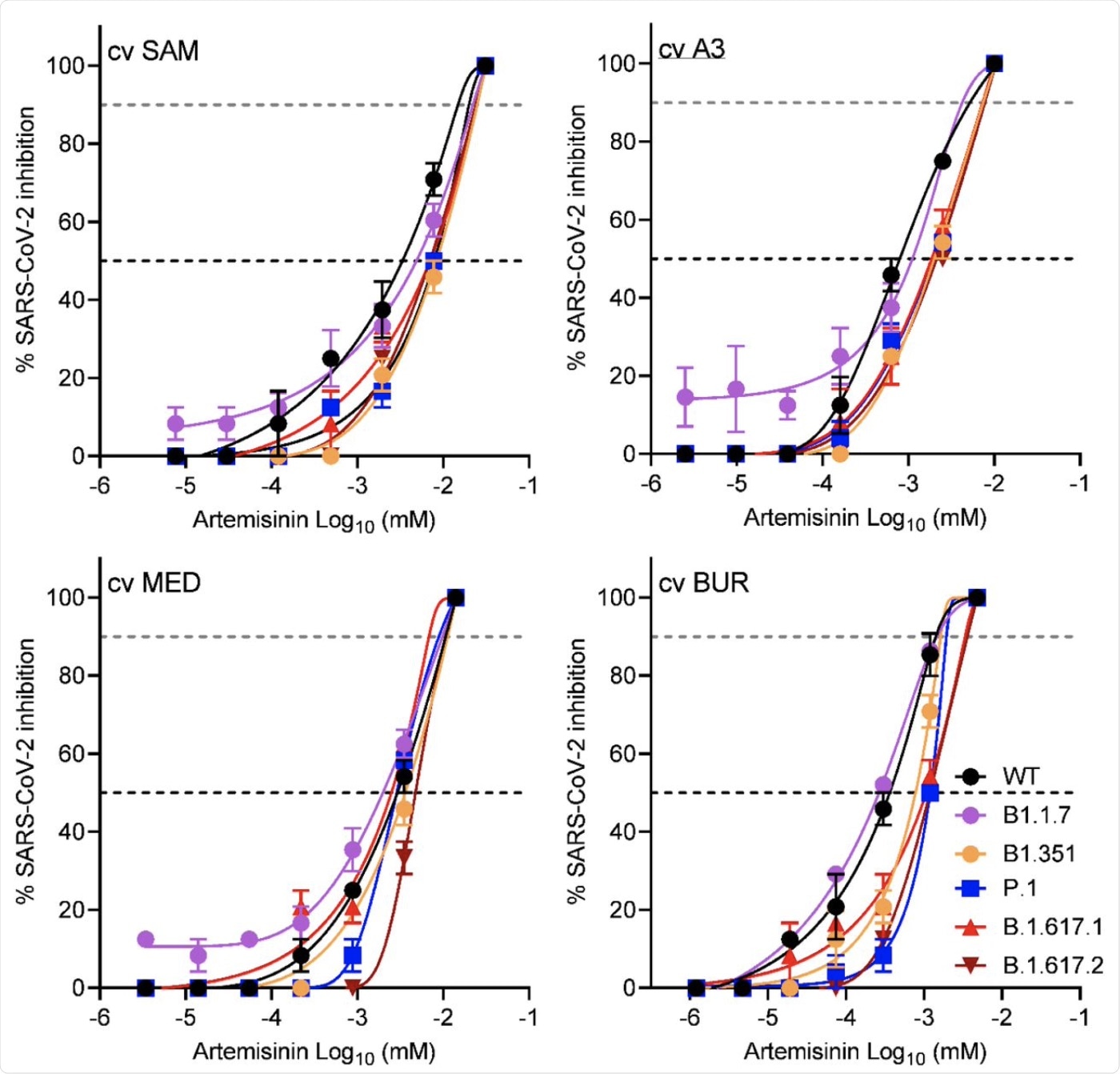 Among all cultivars, the one which stood out was the A. annua cultivar with the lowest ART content, BUR. This cultivar generally had the lowest and thus most effective IC50. These responses are duplicated with the other VOCs, including the Alpha, Beta, and Delta variants.

“These results demonstrate the potential of the extracts as treatments in the global fight against this constantly evolving virus.”

The researchers indicate that this and related herbal extracts require validation by the World Health Organization (WHO) via the inclusion of such extracts in their clinical trials. To this end, further testing on rodent models will be conducted in the near future.

A. annua is an inexpensive compound, and could thus prove invaluable in treating the COVID-19 while vaccines are still being deployed on a mass scale in most parts of the world.