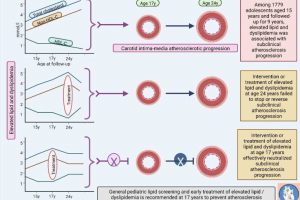 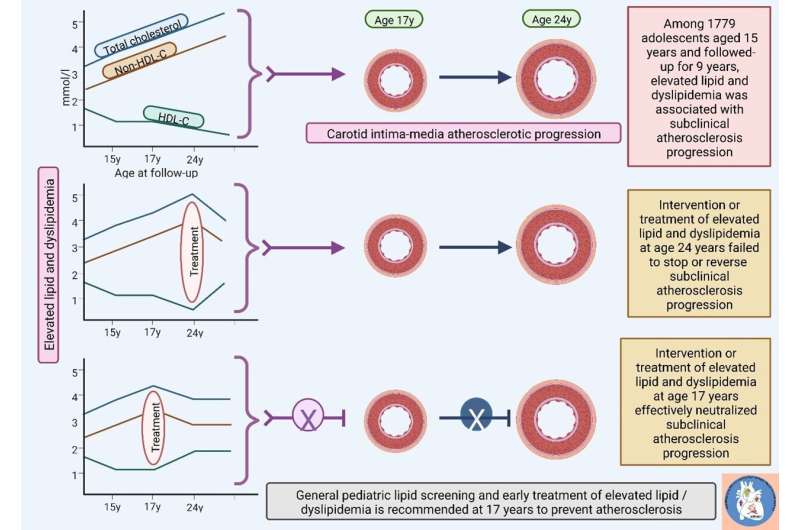 Evidence suggests that children and adolescents who have inherited lipid disorders do well with treatments when commenced early. However, whether elevated lipid and dyslipidemia lead to early cardiovascular damage before mid-adulthood in a large asymptomatic adolescent population is not known.

The researchers found that among these 440 asymptomatic adolescents, signs of subclinical atherosclerosis were evident and the disease unfortunately was already worsening. According to the researchers, this is worrisome as almost all adolescents with the potential risk of cardiovascular disease largely escape early life screening and treatment.

Since clinical trials on the effect of lipid treatment on cardiovascular diseases are rare in asymptomatic children and adolescents, the researchers developed a novel model to simulate a clinical trial intervention. The novel Temporal Inverse Allocation Model involved treatment intervention at a specific age or follow-up time, after which the researchers analyzed whether that treatment stopped worsening atherosclerosis progression.

This study is a critical piece of evidence for the general population’s cardiovascular health and emphasizes the need for early-life screening and prevention of elevated lipids and dyslipidemia from a young age.

“We need not wait until we’re in our 40s to have our cholesterol levels checked. A high total cholesterol level and low HDL level damaged the vascular wall as early as adolescence and if not treated early, we might miss a golden opportunity for better cardiovascular health,” says Andrew Agbaje, a physician and clinical epidemiologist at the University of Eastern Finland.

Treatment of atherosclerosis at a later stage is expensive, tedious, and complicated with often unsatisfactory results. “Atherosclerosis stealthily progresses with time and the earliest possible intervention may offer the opportunity to truncate the disease’s progression.”

“It is important to note that in this study, high total cholesterol, high non-HDL-cholesterol, and a very low HDL level were associated with signs of atherosclerosis, even in normal-weight adolescents. Interestingly, elevated LDL-cholesterol and triglyceride may not yet pose a problem in this age group, especially if there is no genetic inheritance of lipid diseases.”