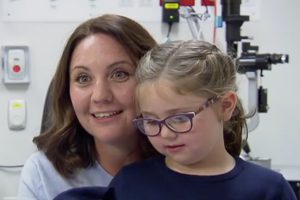 A Queensland mother spotted a rare and aggressive cancer in her baby’s eye and now is urging other parents to look out for symptoms of the disease.

Kellie Perren noticed a strange white glow in her five-year-old daughter’s eye. She was diagnosed with Retinoblastoma and had to have the eye removed. The disease is a genetic condition which affects mostly young children and can be fatal if not treated.

Doctors are worried that many parents don’t know how to spot the warning signs, and often don’t get their child’s eyes checked due to fears they’re overreacting. The disease can often be identified from a white pupil, which is particularly noticeable in photos, as the flash can illuminate the tumours.

Watch below as Dr Ginni Mansberg explains exactly how to spot the disease and get help before it’s too late.

This article originally appeared on 7news.com.au