Home » Health News » B12 deficiency symptoms: Three warning signs of a deficiency that can be felt in the face

B12 deficiency symptoms: Three warning signs of a deficiency that can be felt in the face 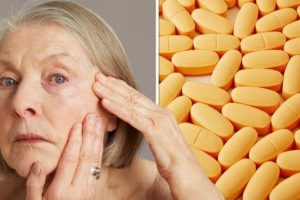 Vitamin B12 is rife among older populations, but the rise of veganism is believed to be fuelling the issue. Left untreated, the condition can pave the way to severe heart and neurological problems. Fortunately, symptoms are likely to arise in the initial stages of a deficiency. There is evidence that these may include facial twitching, facial pain and swelling around the eyes.

The John’s Hopkins Medicine website states: “Vitamin B12 deficiency is a condition in which your body does not have enough healthy red blood cells due to a lack of vitamin B12.”

The purpose of these cells is to carry oxygen to all parts of the body and release carbon dioxide to the lungs to expel.

Symptoms of a deficiency are therefore most likely to occur as different body parts become deprived of nutrients and oxygen.

Some signs can be hard to spot because they are ill-defined, while others can be clear cut.

READ MORE: B12 deficiency symptoms: Three signs in your feet that signal low B12 has caused ‘damage’

According to research presented at the 14th Congress of the International, Vitamin B12 deficiency may cause isolated facial neuralgia – a condition that causes pain sensations similar to an electric shock on one side of the face.

These symptoms can occur independently of other peripheral neuropathy, which occurs when the nerve endings become progressively damaged.

It happens as a result of damage to the trigeminal nerve, which carries sensations from the face to the brain.

There is evidence that treatment with B12 injections can help alleviate the condition, according to the research.

Swelling and dark circles under the eyes

B12 is able to help rid the body of water retention due to its diuretic attributes, so without it, swelling can occur.

In fact, the deficiency is known to be a major cause of water retention, which can lead to the swelling of the tissue around the eyes, giving them a puffy appearance.

The health platform chatelaine adds: “[B12] deficiency can result in poor oxygenation of bodily tissues and the effects of this are shown mostly under the eyes where pronounced, blueish veins are more visible.”

For this reason, under-eyes are believed to be more pronounced among individuals with vitamin B12 deficiency between their skin is pale.

There is evidence that low levels can also cause facial twitching, which is likely to occur as the nerves in the face become progressively damaged.

The twitch may be felt around both eyes, or just one.

Although facial twitching can be frustrating and uncomfortable, it does not cause any pain.

Who’s at risk of a deficiency?

B12 deficiency has strong associations with a vegan and vegetarian diet, but myriad risk factors exist for the condition.

Low levels of intrinsic factor, which is crucial for vitamin B12 to be absorbed by the body, can result from an autoimmune condition, chronic gastritis, or gastrectomy.

A more common cause of B12 deficiency, however, is a shortfall of stomach acid, which is more likely to occur among older people.

This acid is required by the body to liberate vitamin B12 from food, so without it, the nutrient can’t be absorbed naturally.

Finally, Gastric bypass can lead to a deficiency when it disrupts the production of intrinsic factor in the stomach.