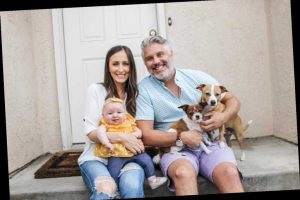 According to Boston Children's Hospital, SMA Type 1 (also known as Werdnig-Hoffmann disease) causes various symptoms in babies as their muscles waste away, such as being unable to sit without support and difficulty breathing, feeding and swallowing. There is no cure for the disease, and, tragically, many babies with SMA Type 1 die before the age of 2.

Despite the tragic news, Ceri and Rory were given some hope — doctors said there were two gene therapy treatments that could potentially improve Rhys' quality of life. But they wouldn't be easy to get.

One of the treatments, Spinraza, has shown improvement in children with SMA Type 1 and 2, according to SMA News Today. The drug — which is administered every four months through a spinal injection — costs $750,000 the first year and $375,000 every year after that for life, the parents say.

The other treatment, Zolgensma, was approved by the FDA in 2019 and is known as the "most expensive drug ever," NPR reported. It costs $2.1 million for a single dose, but the drug has shown improvement in young patients with SMA and "some patients are even able to walk independently," according to Ceri and Rory.

"Because SMA Type 1 is aggressive and degenerative, this is a race against time," the parents wrote on the website, Rise Up for Rhys.

"With each day that passes, motor neurons in Rhys’ sweet little body are becoming inactive," they continued. "In addition to the gene therapy, Rhys will need ongoing physical therapy and support equipment based on her needs to help her develop, improve mobility, and improve her quality of life."

The family started a GoFundMe campaign to raise funds for the therapies, and have raised over $273,000 as of Friday afternoon.

"Every child should have the best possible chance at life," the couple wrote. "Please join us to surround our happy little girl in love and support."

END_OF_DOCUMENT_TOKEN_TO_BE_REPLACED

END_OF_DOCUMENT_TOKEN_TO_BE_REPLACED
We and our partners use cookies on this site to improve our service, perform analytics, personalize advertising, measure advertising performance, and remember website preferences.Ok