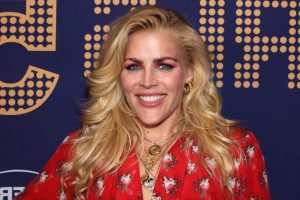 Busy Phillips (Freaks and Geeks, Girls5Eva) has always supported reproductive rights, including access to safe abortions, opening up about the one she had at 15 years old. The actress continues to advocate for abortion access, directly calling out Republican Senator Lindsey Graham via her Instagram.

On Tuesday, the South Carolina Senator introduced a bill to Congress unofficially called “Protecting Pain-Capable Unborn Children from Late-Term Abortions Act,” which would mean a national ban on abortions beginning at the 15-week mark. The proposed bill comes three months after the U.S. Supreme Court’s decision to overturn Roe vs. Wade, leaving it up to the states to decide on abortion laws.

In a post on her Instagram on September 14, 2022, Phillips told the story of her own experience with abortion. Next to a photo of herself as a teen, she wrote, “I’m 15, and this is after I had an abortion. I know. Look at my little face. I want to hug her, too.”

Shedding light on the “legitimate and devastating medical reasons” for needing an abortion, Phillips spoke about the importance of people with reproductive organs having autonomy over their bodies, especially having the right to make choices about their bodies.

“There is this: a CHOICE. HOW to live one’s life, what one believes, the ability to choose for yourself, as you see fit, in that particular moment WITHOUT the [input] of total and complete strangers and their [judgments] or beliefs,” she wrote.

The actress also mentioned the “sliding door moments” that can affect a person’s life, referring to her own special moments, including meeting her ex-husband Marc Silverstein, her abortion, and her “Freaks and Geeks” audition a pivotal moment in her career.

She questioned Senator Graham’s “sliding door moments”, writing, “I wonder what sliding door moments Lindsay Graham(and his like) have had in life? What led him to this point where he’s SO incapable of seeing anything outside his limited perspective? … And I wonder *if* he had been held to the standard that all women are held to, would he have EVER been so bold? (and it goes without saying that the standard is *much* higher for my Black and Brown and trans girlfriends❤️),” the 43-year-old captioned the post.

The actress received an outpour of support following her heartfelt post, with “Scandal” star Kerry Washington commenting, “Thank you for this,” and “Top Chef” judge Gail Simmons writing, “This truly says it all. Thank you brave Busy!”

Before you go, read on about several celebrities sharing their own abortion stories: