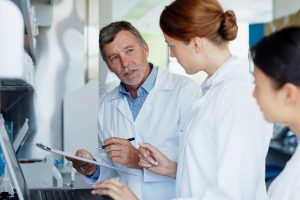 The sooner a cancer is developed the better the life expectancy of the patient.

Earlier this month doctors and scientists announced a breakthrough with the development of an artificial intelligence tool that can predict how likely cancer is grow back.

Described as “exciting” by clinical oncologists, it is believed the technology could revolutionise the surveillance of patients.

The results come after a world-first study conducted by the Royal Marsden NHS Foundation Trust, Imperial College London and the Institute of Cancer Research in London.

NHS physician Dr Richard Lee said of the results: “This is an important step forward in being able to use AI to understand which patients are at highest risk of cancer recurrence, and to detect this relapse sooner so that re-treatment can be more effective.”

Dr Lee added: “Furthermore, the technology will also help patients by lowering “the number of scans needed in this setting…[reducing] radiation exposure, hospital visits, and making more efficient use of valuable NHS resources.”

The chief investigator of the OCTAPUS-AI study described relapse as “a key source of anxiety” adding they hoped to “push boundaries to improve the care of cancer patients, to help them live longer, and reduce the impact the disease has on their lives.”

As well as predicting whether tumours will grow back, the AI technology will help detect new cancers earlier in patients allowing them to be treated sooner.

Furthermore, the technology will also help patients by lowering “the number of scans needed in this setting…[reducing] radiation exposure, hospital visits, and making more efficient use of valuable NHS resources” added Lee.

As part of the study, the doctors looked at non-small cell lung cancer patients at risk of recurrence after radiotherapy treatment.

Lung cancer is one of the four most common cancers in the UK alongside long, bowel, and breast cancer.

In trials, the AI was found to be much more effective at predicting outcomes than current contemporary methods.

“This means there is variation in the type and frequency of follow-up that patients receive.”

Subsequently AI could be used to create a level standard so there is no variation in patient follow-ups.

The study forms part of an game-changing path toward improved cancer treatment and diagnosis.

Results from the study come soon after scientist from the University of Cambridge revealed they had conducted an “archaeological dig” on cancer.

The team studied data from around 12,000 cancer patients to identify new patterns and signatures.

Just weeks after the study the team confirmed they had identified 58 new patterns.

As the war on cancer continues the hope is more studies will result in new pathways that could save not just hundreds of lives, but thousands.