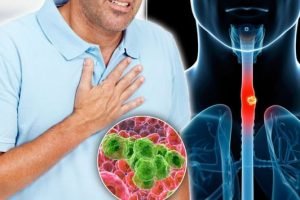 Cancer is a deadly disease that’s caused by specific cells in the body reproducing uncontrollably, according to the NHS. These cancerous cells can destroy the healthy tissue surrounding them – including vital organs. More than a third of all people will develop cancer at some point in their lifetime. But you could be at risk of deadly oesophageal cancer if you have a burning pain in your chest, it’s been revealed.

Persisting heartburn could be a sign of oesophageal cancer

Persistent heartburn or a worsening indigestion could be a warning sign of oesophageal cancer, claimed Mr Borzoueh Mohammadi, Consultant General and Upper GI Surgeon at The London Digestive Centre, part of The Princess Grace Hospital and HCA Healthcare UK.

While heartburn can be very common, a persistent stomach pain could be a sign of something more serious.

You should speak to a doctor if your heartburn is causing you to use over-the-counter medication at least twice a week.

“Digestive complaints, such as diarrhoea, heartburn constipation and bloating, are very common and are usually treatable with lifestyle measures or over-the-counter medicines,” said Mohammadi.

“However, in some instances these digestive problems could indicate that a more serious underlying medical condition is present – and so should not be ignored.

“Heartburn, indigestion or stomach pain are very common, and are usually a reflection of your diet – but, if you notice symptoms becoming more frequent or somewhat worse, then these may require further investigation.

“Indigestion or heartburn symptoms that occur occasionally [for example fewer than twice a week] and easily respond to over-the-counter medication are not usually a cause for concern.

“However, if your symptoms are so severe and frequent that they wake you up at night, cause you to use over-the-counter medications more than twice a week, or become resistant to medications, then you should book an appointment with a reflux expert or local GP.”

If you often suffer from indigestion, you should cut back on the amount of tea or coffee in your diet, and lose weight if you’re overweight.

You should also avoid eating foods within three to four hours of going to bed, and avoid taking ibuprofen, as it could actually make indigestion worse.

Meanwhile, you could also be at risk of oesophageal cancer if you have difficulty swallowing, a loss of appetite, or if you have a persistent cough.

Cancer symptoms: Early warning signs of the most common types of cancer.

Oesophageal cancer is the 13th most common cancer to be diagnosed in the UK, according to Cancer Research UK.

Almost 10,000 new cases are diagnosed every year, and more than 8,000 people die from the disease each year.

The disease mainly affects people in their 60s and 70s, and it’s more likely to affect men than women.

But, signs of the condition only tend to develop during its later stages, and the cancer may have spread quite far by the time it’s diagnosed.

You could lower your chances of developing oesophageal cancer symptoms by cutting back on the amount of alcohol in your diet, or by eating a healthy diet.