Cardi B Backs Out Of Concert Due To Plastic Surgery Complications 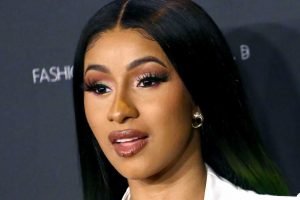 Rapper Cardi B only recently opened up about having liposuction and a breast augmentation—but now, Cardi is apparently suffering from health issues related to the procedures.

On Tuesday, radio station 92Q, which is sponsoring the 92Q Spring Bling Festival where Cardi B was scheduled to perform Friday night, announced a change of date for the festival. The Baltimore radio station cited a “health issue,” for the date change, but TMZ reported that Cardi had actually suffered complications from her recent liposuction and breast augmentation surgeries.

According to TMZ, Cardi’s complications have “gotten so bad, she simply can’t perform.” Cardi’s doctors also reportedly told her to take some time off so the swelling can go down, and “for her body to fully recover.” (FYI: According to the American Society of Plastic Surgeons, full recovery time averages six weeks for breast augmentation, and “several months” for liposuction.)

🚨🚨🚨BREAKING: 92Q’s Spring Bling Festival Featuring Cardi B Is Being Postponed & a New Date Has Been Announced. Here’s Why: https://t.co/lEA6cgma6R

It’s not the first time Cardi’s health has affected a performance—she also mentioned issues from her past procedures during a show at the Beale Street Festival in Memphis, Tennessee earlier in May.

“I have some news for y’all. I should have canceled today,” she said during her performance, according to People. “I shouldn’t really be performing because moving too much is gonna f— up my lipo. But bitch I’m still gonna get my motherf—ing money back, let’s go!”

Since giving birth to her daughter, Kulture in July 2018, the 26-year-old singer has been open about her decision to go under the knife—even hinting at liposuction a month after her daughter was born.“I still feel like I got a lot of love handles right here,” she said while pulling on her stomach, according to People. “It’s not much but it’s like — I’m used to having, like, a real tight stomach … I might just get a little lipo, you know what I’m sayin’?”

Cardi was also vocal about getting her boobs redone (she already had one breast augmentation surgery prior to Kulture’s birth) after her daughter was born. “Yes, my daughter f—ed me up,” she joked in an interview with Entertainment Tonight. “She did. She so did.”

According to 92Q, their Spring Bling Festival will be postponed until September 8th. Here’s to hoping Cardi will be rested and fully recovered by then.