Home » Health News » Cardi B Confirms She Got Liposuction: ‘I Shouldn’t Really Be Performing’

Cardi B Confirms She Got Liposuction: ‘I Shouldn’t Really Be Performing’ 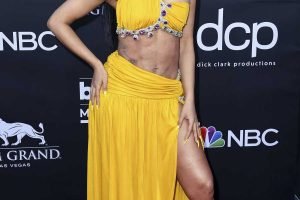 Cardi B is owning up to getting liposuction.

After denying it for months, the 26-year-old rapper told the crowd at the Beale Street Music Festival in Memphis on Sunday night that she did get the plastic surgery.

A few songs into her set, Cardi B, dressed in a skin-tight, sparkly red jumpsuit, said that she shouldn’t really be on stage.

“I have some news for y’all. I should have canceled today,” she said at the festival, sponsored by Facebook. “I shouldn’t really be performing because moving too much is gonna f— up my lipo. But bitch I’m still gonna get my motherf—— money back, let’s go!”

The crowd erupted into laughs and cheers after her announcement.

Back in August, one month after giving birth to her first child, daughter Kulture Kiari, Cardi B floated the idea of getting liposuction.

“I still feel like I got a lot of love handles right here,” she said, while pulling on her tummy. “It’s not much but it’s like — I’m used to having, like, a real tight stomach … I might just get a little lipo, you know what I’m sayin’?”

Two months later, in October, the “I Like It” singer showed off her toned stomach on her Instagram story, but said it was all natural.

“I never did lipo, bro. Never,” she told the camera.

She did reveal though, on Wednesday, that she had a breast augmentation.

“I just got my boobs redone,” she said. “I feel good, but then sometimes I feel like not, you know? [When] your skin is stretched out. Yes, my daughter f—ed me up. She did. She so did.”

A day later, Cardi B wowed fans with her rock-hard abs at the Billboard Music Awards. Decked out in an ab-baring, two-piece yellow outfit, she went on to win six awards.

Cardi B will attend the annual Met Gala on Monday night in New York City — this year the event has a camp theme.

END_OF_DOCUMENT_TOKEN_TO_BE_REPLACED

END_OF_DOCUMENT_TOKEN_TO_BE_REPLACED
We and our partners use cookies on this site to improve our service, perform analytics, personalize advertising, measure advertising performance, and remember website preferences.Ok