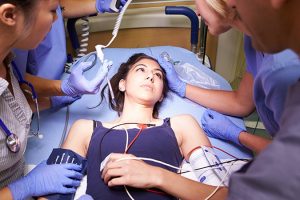 New COVID-19 cases in children declined for a second consecutive week, even as emergency department visit rates started rising for those aged 12-15 years.

The 7-day average percentage of ED visits with diagnosed COVID, which had reached a post-Omicron high of 3.5% in late July for those aged 12-15, began to fall and was down to 3.0% on Aug. 12. That trend reversed, however, and the rate was up to 3.6% on Aug. 19, the last date for which data are available from the Centers for Disease Control and Prevention. 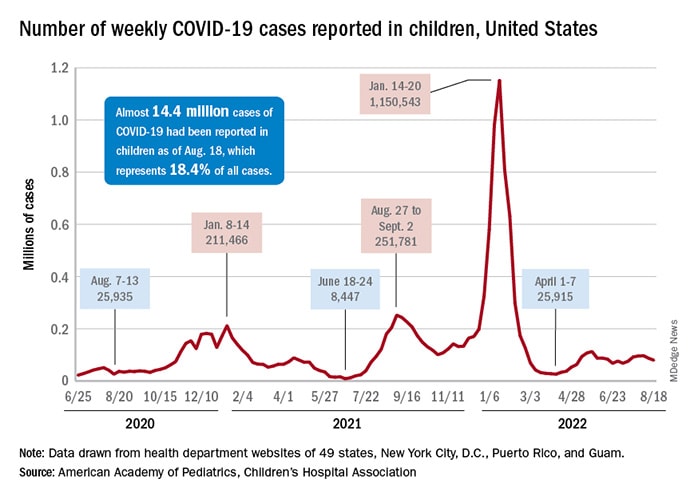 That change of COVID fortunes cannot yet be seen for all children. The 7-day average ED visit rate for those aged 0-11 years peaked at 6.8% during the last week of July and has continued to fall, dropping from 5.7% on Aug. 12 to 5.1% on Aug. 19. Children aged 16-17 years seem to be taking a middle path: Their ED-visit rate declined from late July into mid-August but held steady over the last week, according to the CDC’s COVID Data Tracker.

There is a hint of the same trend regarding new admissions among children aged 0-17 years. The national rate, which had declined in recent weeks, ticked up from 0.42 to 0.43 new admissions per 100,000 population over the last week of available data, the CDC said.

New cases in general were down by 8.5% from the previous week, dropping from 87,902 for the week of Aug. 5-11 to 79,525 for Aug. 12-18. That marked the second straight week with fewer cases after a 4-week period that saw weekly totals increase from almost 68,000 to nearly 97,000, according to a report from the American Academy of Pediatrics and the Children’s Hospital Association.

The AAP and CHA put the cumulative number of child COVID-19 cases at just under 14.4 million since the pandemic began, which represents 18.4% of cases among all ages. The CDC estimates that there have been almost 14.7 million cases in children aged 0-17 years, as well as 1,750 deaths, of which 14 were reported in the last week (Aug. 16-22).

Most Younger Children Still Not Vaccinated

Although it may not qualify as a big push to vaccinate children before the start of the new school year, first-time vaccinations did rise somewhat in late July and August for children aged 5-17 years. Among children younger than 5 years, though, initial doses of the vaccine fell during the second full week of August, especially in 2- to 4-year-olds, based on the CDC data.