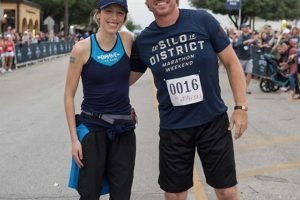 Chip Gaines is honoring the woman who helped him train for his first marathon last year as she moves to end-of-life care.

Gabrielle “Gabe” Grunewald, a professional distance runner, was diagnosed with a rare salivary gland cancer back in 2009, and thyroid cancer a year later. Her husband, Justin, revealed on Monday that Gabe, 32, was readmitted to the ICU upon experiencing septic shock. She was moved to comfort/end-of-life care two days later.

After learning that Gabe had been readmitted to the ICU, Chip shared a heartfelt message on Twitter on behalf of himself and his wife Joanna, writing “To @gg_runs. We love you. You changed us forever, and til we meet again, we promise to be #BraveLikeGabe.”

The former Fixer Upper stars recently gave Gabe and Justin a surprise by adding a few redecorating touches to her home while she was still in the hospital.

“‘There are only two ways to live your life. One as though nothing is a miracle, the other as though everything is a miracle,’” Justin wrote. “@gigrunewald chose the latter. We got her home to our comfy couch and she is resting peacefully and breathing easy surrounded by her best friends and family. She made it home in time to see some extra special finishes @chipgaines, @joannagaines, and @brockwayne put on our new condo to make it feel like home,” he added. “For that, I have no words. #bravelikegabe #runningonhope #keeprunningonhope”

On June 10, Chip also responded to an old photo Gabe posted from from this year’s Silo District Marathon, in which Chip ran the half marathon.

“Wishing the nicest guy we know a great 13.1 tomorrow here at the @magnolia #silodistrictmarathon! And of course sending all the best vibes to the thousands of runners here in Waco challenging themselves and supporting a great cause: the fight against cancer! Say hi to me at the 5k and I’ll give you a #runningonhope temp tattoo. I’ll be out there just having fun and getting to the finish line! See you in the AM!” Grunewald wrote in April.

RELATED: Gabriele Grunewald’s Husband Shares Heartbreaking Letter to the Runner Before She ‘Heads to Heaven’

On Monday, Chip responded with a short but sweet comment, writing “Love you @gigrunewald!! All I ever want is to be #braveLikeGabe. -til we meet again.”

Chip first met Gabe in New York City, while on tour for his book Capital Gaines. In a personal essay published in the summer issue of his Joanna’s magazine, Magnolia Journal, Chip explained that he saw Gabe running through Central Park with Justin.

“I’d always been intrigued by runners, especially ones like this couple, who made it look so easy,” he wrote. “In that moment, I thought about my own list of dreams — including the part of me that’s always wondered if I could ever run 26.2 miles (aka a marathon).”

He attempted to strike up a conversation with the couple, asking them “how long it would take for an out-of-shape guy like me to train for a marathon.” The couple were happy to chat and Gabe told Chip he could be a qualified runner in about 4 months.

Chip then learned about Gabe’s condition, and began speaking to her about the foundation she started a foundation called Brave Like Gabe, whose mission is to support rare cancer research and “empower cancer survivors through physical activity.”

He explained that meeting Gabe “felt like a call to action.” So he went back home to Waco and started planning for the Silo District Marathon, now in its second year.

However, he didn’t want to just plan the marathon. He wanted to run in it, despite being “out of shape” — and Gabe agreed to help coach him.

“I hadn’t worked out in about a decade, and I was easily 20 pounds overweight,” Gaines writes. “That’s not really the ideal starting place for a budding marathoner. But what I did know felt bigger than all of the very good reasons I wasn’t qualified. I knew I wanted to be a part of the work Gabe was doing, so I could either get off the couch and jump in with both feet or sit there comfortably and play spectator to this opportunity as it passed me by.”

RELATED: Chip Gaines Opens Up About His ‘Grueling’ First Marathon: ‘I Could Barely Move’

This year, Gaines says a combined 6,000 people ran in the marathon, half-marathon and 5k races, and they raised over $300,000 for both a local cancer treatment center and the Brave Like Gabe foundation.

“We host this race because I believe when we do hard things together, we can accomplish the impossible!” Gaines wrote in a later blog post on Magnolia.com. “Whether it’s to push our bodies further than we ever have before, or raise a boatload of money to help find a cure for this thief called cancer.”

END_OF_DOCUMENT_TOKEN_TO_BE_REPLACED

END_OF_DOCUMENT_TOKEN_TO_BE_REPLACED
We and our partners use cookies on this site to improve our service, perform analytics, personalize advertising, measure advertising performance, and remember website preferences.Ok