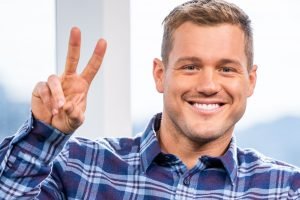 In case you were concerned about what to do with your period underwear each month, don’t fret because The Bachelor’s Colton Underwood’s got you covered.

To be totally honest, the entire interview is cringeworthy, but one question in particular really got my, uh, panties in a knot. When asked if he’s able to tell whether a woman is wearing “a cute underwear or a period underwear,” Colton responded with, “there’s a difference?”

He simply couldn’t wrap his head around the fact that women don’t get rid of their underwear every time a little period blood gets on them—even after Becca explained to him that periods “happen every single month!”

But Colton wasn’t ready to back down (then again, the guy jumps fences in a single bound, so there’s no stopping him). He continued, telling the women who’d been successfully washing their period underwear for years to “go buy new underwear” despite that fact that a monthly underwear purchase is wasteful and absurd.

Then, America’s knight in shining armor threw out: “I, as a husband and a boyfriend, will go buy you new underwear. That is so gross.” (And you thought romance was dead.) Finally, he ended his period panties rant by comparing monthly periods to diarrhea: “So, if you shit your pants are you just going to just wash them?” And to this he got a resounding yes, because why not? Hot water and detergent work miracles, guy.

To be totally clear, the ladies (and Colton) aren’t referring to actual period panties—absorbent underwear used in place of tampons or pads each month—but tbh, he’d probably be even more grossed out by those. So, hey, Colton, they totally exist; in fact, here are seven pairs of the best period panties your girlfriend Cassie Randolph can buy.

And if you’re not totally exhausted by having Colton mansplain how to care for your period panties, he also offered some keen insight into whether or not it’s necessary for a girl to get waxed regularly (“Yes, 100 percent,” he said), highlighted his total lack of knowledge on unnecessary dick picks (“Maybe the reason is those guys have a big dick and they want to show it off,” he said), and put a number on how many times a week a woman should have sex with her husband (“Ideally, probably like three to four,” he said).

Cassie, girl, you’re free to make your own decisions, but if I were you, I would GTFO, ASAP…or at least go buy some period panties out of spite.