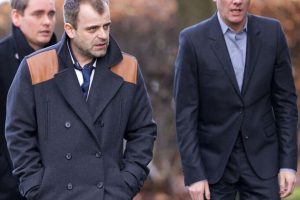 Having starred on Coronation Street since 1989, Simon Gregson entering the I’m A Celebrity… Get Me Out Of Here! jungle may not have seen like such a huge step. For his wife, former Hollyoaks’ actress Emma Gleave, him entering the contest was more of a big deal than his fans would have realised. Last year, when Gregson was tasked with eating a pig’s eye and goat’s tongue, his wife of more than 10 years said how “proud” she was of him.

“Ten years ago, there would have been absolutely no way he would have done I’m A Celeb,” said Gleave.

“To watch him go in and take on the unknown, which he was really nervous about, to actually embrace it and to look so relaxed while he [was] doing it, we are dead proud of him.”

Gleave – who he shares three children with – admitted she was “very emotional” watching him on the TV show.

“When we first got together he couldn’t leave the house or go to restaurants because [his anxiety] was so bad,” she revealed.

READ MORE: Acholic stools are ‘the most common’ sign of pancreatic cancer in ‘initial’ stages

“One time we went to stay in our caravan in Anglesey, and Simon thought he was having a stroke and dying. His whole face dropped and we had to call an ambulance.

“He got to the hospital and they told him he had a panic attack. He has since been diagnosed with an anxiety disorder and it has completely changed his life.”

Gleave reflected: “There was a reason why he felt like he did… he was medicated [and] that changed everything for him… he could understand what was wrong.”

The NHS explains: “Anxiety is a feeling of unease, such as worry or fear, that can be mild or severe.”

While certain situations can trigger anxiety, such as a job presentation, “you should see your GP if anxiety is affecting your daily life or is causing you distress”.

There are different types of anxiety; for example, there is generalised anxiety disorder (GAD).

Estimated to affect about one in every 25 people in the UK, typically in the age range of 35 to 55, the symptoms of GADA can include feeling:

Physical symptoms of GAD can involve:

“In most cases, the first medication you will be offered will be a type of antidepressant called a selective serotonin re-uptake inhibitor (SSRI),” the NHS says.

There can be side effects of taking medication, such as nausea, a lowered sex drive, and dizziness.

Despite living with anxiety, Gleave said of her husband: “He loves a laugh… [on a night out] he always ends up dancing on the tables.

“He’s got a thing about being free. If anything silly is going on at the end of the night, he will be involved.”

Watch Simon Gregson undergo a drag makeover in ITV’s Queens For The Night, showcasing on Saturday, November 5 at 7.30pm.